Portlaoise Court: Local man with 95 previous convictions had knife for his own protection 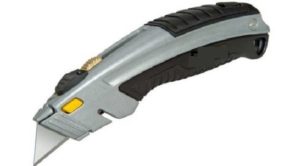 A man with 95 previous convictions received the benefit of the Probation Act when he was summoned before Portlaoise District Court last week for possessing a knife.

He was charged with possessing a carpet knife when he was stopped and searched by gardaí on 21 March last year at Bellingham, Mountrath Road, Portlaoise.

He pleaded guilty to the offence.

Garda Sergeant JJ Kirby said that while gardaí were on patrol they noticed two men acting suspiciously. When one of the men was searched, they found the carpet knife in his possession. He said the defendant told them he was carrying the knife for his own protection.

While the defendant had 95 prior convictions, Sgt. Kirby said that most of them were historic. Defending solicitor Philip Meagher said that his client had lived most of his life in Portlaoise. He had issues with alcohol and drugs and made a decision to move away from Portlaoise and moved out west, where his family had land. However, a disagreement with them saw him move back to Portlaoise, where he became homeless for a while and fell back in with bad company.

Mr Meagher said that his client “appreciates the dangers of carrying a knife and says he will never do anything like that again”.

He said that his client is currently on a rehabilitation programme and is doing very well.