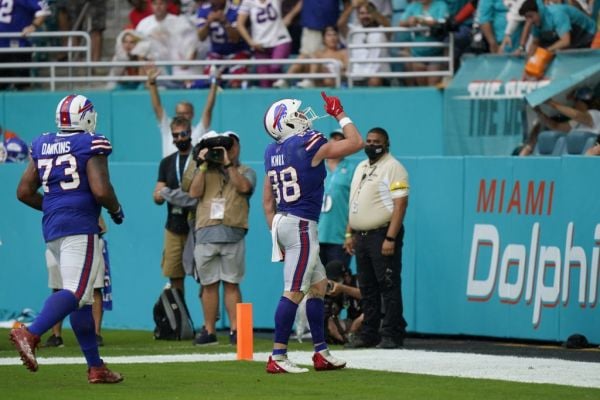 Buffalo Bills claimed the first shutout of the new NFL season to clinch a 35-0 win over Miami Dolphins on Sunday.

It continued the Bills’ dominance over the Miami side with this a sixth consecutive victory over Dolphins, who lost quarterback Tua Tagovailoa early on to a rib injury.

Devin Singletary’s 46-yard touchdown got the scoring started before Josh Allen found Stefon Diggs which made it 14-0 at the interval.

Allen picked out Dawson Knox early into the third quarter to reach the milestone of 10,000 career passing yards and two late TDs by Zack Moss helped Bills bounce back in style from an opening loss against Pittsburgh Steelers.

Carolina Panthers are two from two and Christian McCaffrey was able to open his account for the campaign on his return from an injury-hit last season.

The running back missed the majority of Matt Rhule’s debut term due to ankle and shoulder problems respectively and while he exited their 26-7 victory over New Orleans Saints early, it was only down to “cramp issues” according to the Charlotte-based team.

San Francisco 49ers also boast a 100 per cent record after a 17-11 success against Philadelphia Eagles.

Jauan Jennings’ first NFL catch gave him a TD and Jimmy Garoppolo went from creator to scorer to help the 2020 runners-up stay perfect.

A sensational 102-yard TD return from Jamal Agnew could not prevent Jacksonville Jaguars suffering another loss, this latest one to Denver Broncos.

Teddy Bridgewater helped Tim Patrick and Noah Fant go over for Broncos to earn a 23-13 win and Las Vegas Raiders can also boast two out of two.

Not even a minor ankle injury could stop Derek Carr pulling the strings for Raiders, who followed up a narrow triumph over Baltimore Ravens with a nine-point victory over Pittsburgh Steelers.

Young was forced to leave at the end of the third quarter after he appeared to make contact with the referee but Rams edged ahead late on through Cooper Kupp’s TD.

Demetric Felton spun his way to a first NFL TD from 33 yards in Cleveland Browns’ 31-21 victory against Houston Texans while a knee injury forced off Chicago Bears quarterback Andy Dalton but they edged out Cincinnati Bengals by a 20-17 score.

Baltimore Ravens secured a comeback win over the Kansas City Chiefs. Having trailed 35-24 late in the third quarter, the Ravens engineered a 36-35 victory to avoid a fourth straight loss to the Chiefs.

Dallas Cowboys were without starting ends Demarcus Lawrence and Randy Gregory because of injury and Covid protocols but impressed defensively in a 20-17 victory over Los Angeles Chargers.