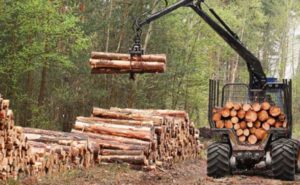 Local Sinn Féin TD Brian Stanley says that the crisis in the forestry and timber industry cannot be allowed to continue any longer.

Deputy Stanley said: “Last Friday along with other TD’s I met with Laois Farm Forestry members at Clonad to hear directly from them the problem they are experiencing. This group represents 530 farmers who have forestry planted in the County.”

He said: “Confidence has completely gone out of the farm forestry sector in the Midlands due to the crisis in the felling licencing’ system.

“For example, in Laois over 400 hectares per annum was being planted in farm forestry. This was reduced to just 26 hectares last year. There has been a massive drop off in the past five years and a complete collapse in confidence in the sector. This is having a knock on effect on sawmills in the Midlands as they are forced to import some of their logs from Scotland.

“Within a few miles of Coolrain Sawmill there are forestry plantations ready for harvesting for the past three or four years but this can’t be cut due to the delays in obtaining the felling licences. Meanwhile the Sawmill, in common with many others, has to import some of their supply from Scotland. Currently there are over 5,000 felling licences held up in the Department of Agriculture. Immediate action is needed by the Minister Hackett and her officials in terms of extra staff etc to clear the backlog for licences.”