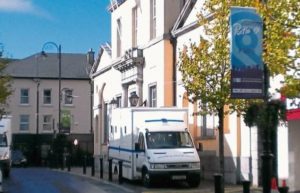 A woman who allegedly put up a struggle while gardaí were carrying out an arrest warrant had her case adjourned at Portlaoise District Court recently.

The case involved a 37-year-old woman who was charged with assault causing bodily harm.

The court heard that on 4 September 2019 while gardaí were arresting the defendant on foot of a bench warrant she allegedly began struggling with them.

During the struggle it was alleged that she scratched a garda’s thumb, breaking the skin and drawing blood, which necessitated him attending A&E at Portlaoise hospital.

Garda Sergeant JJ Kirby told the court the injury the garda received was minor and that the defendant apologised to him the next day.