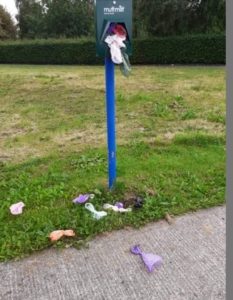 DESPITE residents in an area of Portlaoise having to pick up 30 bags of dog dirt every week that are dumped beside Mutt Mitt dog waste bag dispensers, Laois County Council has no plans to provide dog fouling bins to put these bags in.

That was the reply given to cllr Catherine Fitzgerald when she called on the council to either install dog foul collection bins under Mutt Mitt bags or else remove the bags altogether.

Adrian Barrett from the council’s Roads/Environment section replying to cllr Fitzgerald said the council is currently running an anti-dog fouling campaign and promoting responsible dog ownership and encouraging dog owners to clean up after their pets, “using their own scooping device or bag or one of the Mutt Mitt bags , before disposing of it in the nearest litter bin, or take it home.”

He said there are currently 68 Mutt Mitt bag dispensers around the county.

Mr Barrett said: “The provision of dog-fouling bins at the dispenser locations is not being considered at the moment. These bins will necessitate the provision of collection and maintenance. The council does not propose to remove any of the dispensers (Mutt Mitts).

He said: “The collection and disposal of dog waste is the responsibility of the dog owner.”

“I’m so disappointed with this response,” said cllr Fitzgerald.

“I don’t think we are looking at the reality of what is happening on the ground, literally. Residents living along the Borris Road are picking up 30 bags of dog dirt that are left under the Mutt Mitt dispensers every week. People are going out not just in this area but in other areas of the town picking it up. We need the bins or else take the Mutt Mitts out. Everyone agrees that the responsibility is with dog owners. But what’s going on is absolutely filthy. People are begging me to get dog foul bins. It’s not fair on people tidying up, it’s disgusting. Even try one or two bins on a trial basis. Or put a slogan on the footpaths, – ‘clean it up, you dirty pup’ – like they do on the promenade in Galway.”

Cllr Ftizgerald said: “People are taking their dogs for 10km walks and some won’t hold onto the bags (with dog dirt) until they get back home. Either we provide bins or we remove the Mutt Mitts.”

Cllr Thomasina Connell said the problem with the dog poo on the footpaths is the lack of enforcement of the bye-laws that places the onus on dog owners to clean up after their pets.

She wanted to know: “How many fines were issued by Laois County Council (re dog-fouling)? We need to encourage people to be responsible owners and it’s only through enforcement we can encourage that.”

Cllr John Joe Fennelly said that Abbeyleix Tidy Towns had to remove dog-dirt disposal bins after people put domestic rubbish in them. He also said that people were also disposing of bags with dog poo in them in the Mutt Mitt dispensers.

Cllr Fennelly agreed that the council should try one or two collection bins on a pilot basis.

“The problem I see, “ said cllr Caroline Dwane Stanley, “is that if you supply collection bins domestic rubbish could be put in them. On the other hand, if you don’t we’ll be left with the job of disposing of the bags at the Mutt Mitt dispensers.”

“Cllr Willie Aird said: “A lot of people are very responsible dog owners, but you can’t expect them to carry the bags for four or five miles with nowhere to dispose of them. We should put a few bins in and monitor them. If they’re not working then take them out.”

Cllr Noel Tuohy supported the suggestion of a pilot scheme to see how they get on.

Cllr Fitzgerald said: “With so many people looking for the bins, I think they will be well monitored by dog walkers.”

Acting District Manager Paul McLoughlin said: “I couldn’t support that if the bins don’t go in then 68 Mutt Mitts would have to come out.”