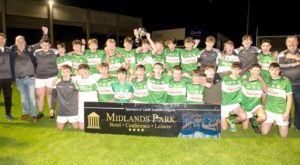 The Na FIanna team and mentors celebrate winning the U/17HC ‘B’ title in LOETB Centre of Excellence on Wednesday night Photo: Denis Byrne

DYLAN Kelly’s goal in the LOETB Centre of Excellence on Wednesday was greeted with an curious mixture of stunned silence and high-spirited cheering. The Na Fianna’s corner forward struck for the goal that would edge his side in front just when the U/17 HC ‘B’ title looked destined for Park-Ratheniska/Timahoe Gaels.

And when Ciaran Culliton added another goal for good measure there was no way the Ballyfin, Clonaslee St Manman’s and Mountmellick amalgamation was going to be denied much to the disappointment of the distraught PRT players.

Glen Connolly had opened the scoring for Na Fianna but were soon stunned when Cian Nolan placed Conor Fitzpatrick to find the top of the net for a cracking goal.

Na Fianna responded positively with Tom Smyth converting a free, followed by the equalising point by Fionn Owens from play. With Conor Fitzpatrick (free) and Dylan Roche-Duff adding points for Park-Ratheniska/Timahoe Gaels their two point lead was back to the minimum at the first water break after Dylan Kelly landed an excellent point, 1-2 to 0-4.

The Park-Ratheniska/Timahoe Gaels lead was back out to two points thanks to an Adam Ramsbottom point but Na Fianna responded with their first goal of the game. Ciaran Culliton displayed some nifty footwork before passing to Jack Heffernan who drove low and hard to the bottom corner.

Dylan Roche-Duff split the posts for Park-Ratheniska/Timahoe Gaels but instantly that point was cancelled out by Tom Smyth with a excellent long range point.

Park-Ratheniska/Timahoe Gaels retook the lead approaching half time when a long ball from Dylan Roche-Duff looked to be going wide. However, Patrick Joyce displayed great determination to keep the ball in play. He duly moved it on to Cormac Murphy who sent a rasper of a shot to the Na Fianna net.

Holding a 2-4 to 1-5 at the break Park-Ratheniska/Timahoe Gaels came out determined to kick on and they looked to be on track with Cormac Murphy landing the first point of the new half.

Conor Fitzpatrick (free) and Ciaran Culliton exchanged points but Park-Ratheniska/Timahoe Gaels were taking command of affairs as Fitzpatrick converted another brace of frees.

However, Na Fianna were not prepared to lie down and thanks to two Jack Heffernan frees that just a goal separated the teams at the second water break.

The final quarter saw the two sides match each other almost point for point. Conor Fitzpatrick added a point on the restart only to have it cancelled out a Tom Myth free and who then split the posts from a 65. With Fitzpatrick and Heffernan (free) exchanging points two points were still separating the sides approaching the hour mark.

And just when it looked like the way of Park-Ratheniska/Timahoe Gaels Dylan Kelly finished Ciaran Culliton’s pass to the net in the 60th minute. A minute later it was Culliton’s turn to raise the green flag when he gathered a Tom Smyth sideline cut and buried the sliotar in the net.