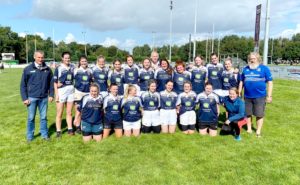 Portlaoise women’s team are in line to bring the first silverware to Togher when they contest the Paul Cusack Cup final against MU Barnhall on Saturday in Tullow, kick off 2pm.

The team kicked off the 2021/’22 season with a five-point victory over Clondalkin RFC at Togher three weeks ago. The result in the balance up to the final minutes but Portlaoise were to emerge victorious on a 12-7 scoreline.

And if that game was a closely fought battle the semi-final was an even closer encounter.

Last week the team travelled to Forenaughts in high spirits to take on Naas. They were strenuously test by a dogged Naas outfit with victory only secured late in the game when second row Aoibheann Egan crashed over for the winning score.

Given that MU Barnhall beat Wicklow 24-12 in their semi-final Gordon Matthews will need to have the girls hitting top form for this game.