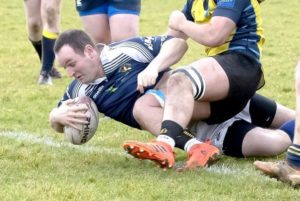 Portlaoise captain Ross Cooper will be hoping his side can get their 2021-’22 Leinster League campaign off to a winning start against Wexford in Togher on Sunday              Photo: Sean Brilly

After almost 12 months on the sidelines Portlaoise RFC 1st XV will at last see some Leinster League action on Sunday. It will take time to shake off the cobwebs but players, mentors and spectators will be delighted to see some live action.

Wexford Wanderers travel to Togher on Sunday and after such a long lay off it is difficult to predict how this game will play out. For Wexford this will be their first outing in the Leinster League in two seasons as they had a bye in the first round last year.

There was just the one round played last year before the league was suspended. In that round defeated Athy 7-8 in the Showgrounds.

When Portlaoise and Wexford met in Division 2A back in the 2019/20 season it was even stevens both sides winning their home fixture, Portlaoise winning 34-11 and Wexford 20-10.

The game kicks off at 3pm in Togher, so why not come out and support the lads.