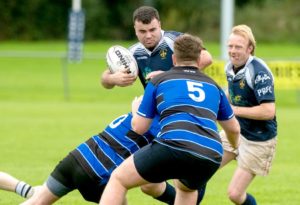 PORTLAOISE RFC got their 2021/’22 season off to a winning start in Togher on Sunday but not before getting a might scare from the visiting Wexford Wanderers.

Wexford took the lead in the run up to half time and extended their advantage as the second half wore.

However, Portlaoise displayed battling qualities and worked their way back into the contest. All their effort paid off when outhalf Niall Keenan skipped over in the corner for the winning try in the 85th minute.

After almost 12 months of inactivity both sides looked decidedly ring rusty with the game littered by many handling errors. Some this can of course be out down to the blustery and wet conditions. In fact, for much of the second half torrential rain added to the players’ hardship.

The cross-field wind made life very difficult for both sides and in particular for the kickers. This was evidenced in the fist ten minutes when twice Wexford elected to have a shot at goal both both were carried wide by the wind.

Portlaoise were guilty during the opening half of conceding a lot of silly and unnecessary penalties and when they eventually won a kickable shot themselves the out was the same as Jack Reddin’s kick drifted wide of the mark.

Wexford were enjoying the majority of the possession and it paid off in the 34th minute when after going through phases they got in for a try which was converted.

And they extended their advantage on the pip of half time when Portlaoise were penalised of going offside at a lineout and they kicked the penalty to lead 0-10 at half time.

The home side showed far more urgency on the restart and got an early reward when Jack Reddin converted a penalty after Wexford had strayed offside.

But the respite was short lived. Five minutes later Wexford went in for their second try after Portlaoise had failed to find touch with a defensive kick. The visitors took advantage, spread the ball wide left and after a few rucks crashed over to the try which went unconverted.

Things got worse when Philip O’Brien was rather harshly yellow carded but the other 14 dug deep and actually narrowed the gap. Portlaoise crashed through a Wexford lineout with Mark Sherlock winning the ball. He transferred to Michael Rigney who made ground before moving the ball to Paddy Coss. He was stopped just short of the line but Sherlock gathered to get the touch down.

So entering the final quarter it was still all to play for with Portlaoise trailing 8-15 and now getting more and more into the game. And with 12 minutes left to play the gap was reduced to just two points.

As Wexford attempted to stop a series of Portlaoise rucks and mauls the ball squirted out. Portlaoise hooker Ryan McEvoy hacked the ball on and then beat the defender to the touch down.

Play moved from one end of the pitch to the other and it looked like time was running out for Portlaoise. When Wexford were penalised for killing the ball in a ruck in the 80th minute they elected to kick for goal when a kick to the corner might have paid better dividends especially as Reddin’s kick into the ever stiffening wind drifted wide.

But they still had time. Wexford kicked off to them and Portlaoise sets off on yet another excursion deep into Wexford territory. After ten to 12 phases of play Portlaoise eventually wore down Wexford as Keenan found space in the corner to cross the line.

The conversion was missed but it didn’t matter as the referee blew the final whistle once it was kicked.

Next Sunday Portlaoise travel to Kilcock to take on North Kildare who lost 18-8 to Newbridge at the weekend.