A baker’s dozen for Portlaoise against Bealnamulla 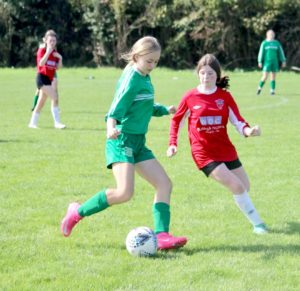 THE sun was shining in Rossleighan Park as Portlaoise U/16 girls warmed up for their third game of the season where they faced a really professional looking Bealnamulla squad.

The Portlaoise team where without the usual goalkeeper Keeva O’Reilly who had two fingers heavily strapped so it was up to our veteran goalie Eire Delaney to step in for the day.

Eire has made quite a name for herself since leaving the sticks and has settled in very well as a brave and calm outfield player where the right back position is one she makes look easy.

Two players were missing for Portlaoise, however they had a strong starting line up with  Caoimhe Murphy at right back, and what a game she had, the deadly duo of Devine and Zainab as centre-halves and the ever reliable strong Ava Coleman, playing left back.

On the wings Tara Woodcock started on the left after really earning her place on the team with fantastic dedication and hard work shown at training week in week out. On the right was team captain, Abbey Louise Byrne who showed he usual relentless work rate running at the opposition from the first whistle to the last.  In the centre was Sadbdh McGrath and Ciara O’Niell who both gave 100% from the start on what was an oppressively hot morning.

Centre forwards were Nuria Trefus and Sophie Cullinan who both had fine games.

The game started with the home team looking a little uncertain on the ball. Too much time to make decisions, and not enough talking on the pitch led to mistakes early on. It was the girls in red who opened the crossing with the Portlaoise girls inviting pressure in the wrong area of the pitch which Bealnamulla capitalised on, by pressing quickly, winning the ball and putting it in the back of the Portlaoise net.

That was the wake up call the green machine needed to get going. Each girl raised their game and delivered on their potential, playing some really good football, using the wings to full affect and it was the pure strength of Ciara O’Neill who broke through the defence to score the equaliser minutes after Bealnamulla went ahead.

From then, Portlaoise had the upper hand.  Ada Byrne was introduced and injected new energy to the game  Goals from Nuria Trefus, Abbey Louise Byrne and our second substitute, goalkeeper come winger extraordinaire Keeva  O’Reilly got what was to be the first of an amazing hat trick on the day.

Half time arrived with  the home leading  4-1.

Orna Tynan was introduced for the second half into the middle of the park which was a new position for her, but she looked well and did a good job, until finally being moved to the more familiar winger position where she scored a wonderful goal dribbling the ball in and out of retreating defenders and calmly slotting the ball into the bottom right hand corner of the net.

At the end of the day Portlaoise finished convincing winners, with goals on the board for Nuria Trefus (3) Ciara O’Neill (3) Keeva O’Reilly (3), Sophie Cullinan (2), Abbey Louise Byrne (1) and Orna Tynan (1).

Special shout out to two players on the day our outfield player who swapped right back, to end up right back in the goal Eire Delaney, and our goalkeeper who swapped goal kicks for hat tricks.

Three from three now, a great start with some serious challenges to come.