Ben’s hat-trick helps Portlaoise get back to winning ways 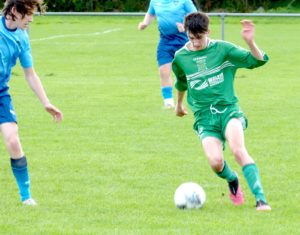 PORTLAOISE AFC were looking to get back to winning ways after back to back defeats in previous weeks to Newbridge United, as Rathangan AFC turned up at Rossleighan for their next test.

Portlaoise stated brightly with Jamie Toman unable to get a shot away as the ball got stuck under his feet in the box and a superb passage of play just after that saw TJ Delaney unlucky not to see someone on the end of his fizzing ball across the box.

With seven minutes gone Ben Doyle got his head to TJ Delaney’s deft flick in with the outside of the boot but it just flew over.  Jamie Toman then followed up with two speculative long range efforts sailing over the bar.

On 17 minutes Rathangan nearly had a breakthrough. AFC were caught a few times on the right side and the inswinging ball saw the striker get time to take a touch and strike on the turn as the volley flew just over the bar.

Ben Doyle had a strike on target saved followed by a Rathangan free that just went wide as AFC began to get a bit frustrated.

Rathangan almost nicked the opener again as the Portlaoise defence and keeper were caught out completely amongst themselves but luckily the shot to an empty net from the edge of the box went wide of the right post. Let off for Portlaoise.

A thunderous free for Rathangan from the edge of the box could only be parried by Lee Smyth in goals and the resulting rebounded shot went out for a corner.

Approaching the 27 minute mark Portlaoise rode out the storm and had a bit of luck as Robbie Farrell痴 stellar perseverance in midfield paid off with a shot from 35 yards that slipped along the surface and through the keeper’s hands. It was 1-0 to the home side and a roar of relief.

Five minutes later Jamie Toman take on two defenders near the corner flag when the ball seemed dead and he ghosted past them to just fire over the bar from the edge of the box.

It was 2-0 on 33 minutes when Ben Doyle from 20yards attacked a defended corner struck a lovely sweet dipping volley over a crowded box and the diving keeper giving him no chance.

Robbie Farrell then smashed the post from distance and picked up the rebound feeding Ben Doyle who jinked his way through the box and lifted the ball over the advancing keeper into the far corner. 3-0 and a lovely worked goal.

Ben McDonald was mopping up the Rathangan kick outs in the air and working really hard in midfield with Ben Doyle and Robbie Farrell who never stopped encouraging and driving his teammates. Doyle nearly scored a sublime goal with a deft flick from the edge of the box as it just went over the bar.

The second half saw more of the same with two early box chances for Portlaoise but no joy and Doyle was unlucky not to make his hat trick on 49 minutes as his curling shot went just past the post.

Three minutes later and penalty for Portlaoise and Ben Doyle was given the chance for his easiest hat trick completion.  But it wasn’t to be as a forgettable strike at a perfect height and too central for the keeper saw him save it.

Complacency had set in a bit by Portlaoise but a goal for Rathangan on 55 minutes shook them awake again. Rathangan floated in a free which was missed by the defence and the keeper and it nestled softly in the back of the net.

Ten minutes later saw Ben McDonald’s screamer from 25 yards from the left side flash just past the far post but Rathangan were winning a few frees in the opposition half to just keep themselves as a thorn in Portlaoise痴 side.

With 74 minutes on the clock Farrell drilled a fantastic volley from 20 yards out after excellent work by Ben McDonald and Benedicte Fordjunior to build up to make it 4-1. Fordjunior, who normally plays up front, was a revelation on the left wing for the rest of the game.

Five minutes later Alan Papierzynski and Benedicte Fordjunior tormented the centre back into dropping the ball at Alan痴 feet and he blasted it into the roof of the net making it 5-1 with his first goal for this team.

The sixth goal came at the death as Ben Doyle finally got his hat trick with a nice finish past the advancing keeper to round off the game.

Portlaoise needed that confidence boost and it was great to see most of the squad back now with Robbie Farrell named as man of the match who completely bossed the game with several other notable mentions too.