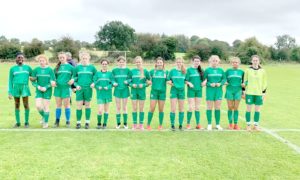 AN EARLY morning commute across the Midlands took Portlaoise U/16 girls to the Swans in their new home in Killucan, a beautiful pitch to play on and a superb facility.

The squad was depleted missing four key players from injury or unavailability so young Niamh Dundon from the U/14 squad got the call up to boost the squad, while Kieva O’Reilly made a welcome return in goal following a recent injury. Despite this the team was strong with  Eire Delaney at right back, joined in defence by Ava Coleman and Zainab Ganiyu and Caoimhe Murphy at left back.

On the flanks Tara Woodcock started on the left and Abbey Louise Byrne on the right. In the centre was Ciara O’Neill who was magnificent from box to box, scoring three goals on the day, her last which ended in the top corner from a 25 yard rifle shot.

Playing as a holding midfielder was Niamh Dundon , who had an excellent game in that. Up front we had Orna Tynan, who was magical with her intelligent playmaking and  Nuria Trefas – a wonder player who scored four on the day.

Jessic Maher and Sophie Doyle played their part when introduced, the former also finding the net.

Man due in court over murder of Ashling Murphy