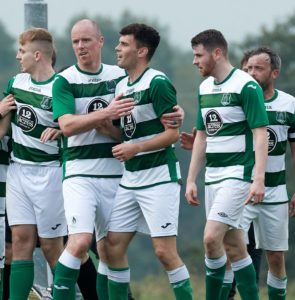 Killeshin have become a team in recent years who always offer so much promise but never quite deliver on it. Full of talented players, they play exciting football but never quite deliver and haven’t reached their potential. Player-manager, Micheál O’Rourke says that the club are just starting to build and that they are aiming for a mid-table finish this season to build on for the future.

He added: “I think what matters most is the environment, we have a lot more local players this season, players from Carlow, who are buying in well to what we’re trying to do and the way we’re trying to play and the lads who have been there, it’s really hitting home to them how to play. And the lads coming in from the college, they don’t necessarily know each other well, they haven’t all played together. It’s just about everyone having the right attitude. It’s just a really enjoyable atmosphere there.”

O’Rourke said results like the recent win over Crettyard will help towards that.

“That was great for the lads, we were well aware that Cretty were missing players so all we could do was go out and perform as best as we could and we’re lucky we have a squad that will work well together and there’s good unity there.”

Over the past few years, Killeshin has become a home to students from IT Carlow to play football whilst they are in college. However, part of the difficulty with that is that it makes it hard to develop and build a team when most won’t stick around longer than two or three years and the turnover is big.

However, O’Rourke is determined to change that and make the club a home for all.

“It is hard but that’s we’re trying to develop the club. So we appreciate the lads from the college, there’s an open door policy there but at the same time we are trying to recruit locally in Carlow and Killeshin, we’re really pushing the underage too to try get them back into the squad. What we’re trying to do is really create a home for these players.

“It’s not just a case of going in and pulling players out of the college whenever we need, we want to create an environment where people come to Killeshin and they feel so welcome that they want to stay and that its their local club. Look at me, I’m a year out of college at this stage and I’m still here and that’s what we’re trying to do. We have everything we need here, the facilities, the people, the approach in the club. I think its about developing the club all the way up, that’s just as important as improving the first team. There’s no pressure to get a result in the league or get a result because there’s that understanding there that it’s all about improving as a team and as a club.”

When they can, O’Rourke is hoping that Killeshin can be dominant and control games. “Where we can play on a good surface in the right conditions and the right players available, we will look to play. We will look to dominate when we can and have possession and if other teams have the ball and we have to shale them off, we’re more than capable of doing so.”

O’Rourke added that being a player-manager is hard but he’s well supported.

“I started off initially as just the manager but ended up playing due to low numbers and just continued playing. I’m surrounded by good people though and it’s such a good squad which makes it easier. It’s just such a welcoming atmosphere which is what makes it possible. If we didn’t have that, I’d struggle.”