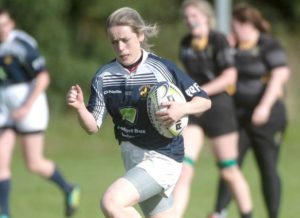 A WEAKENED Garda side travelled to Togher on Sunday but the local ladies were in no mood to ease up the challenge. They are determined to get promoted this season so every victory will be crucial and a win like this on Sunday will give what is a relatively inexperienced side a lot of confidence.

It has to be sad the writing was on the wall from the opening seconds of the game. Hardly had the kick off been take by Garda when Portlaoise countered. The ball was swiftly spread across the backs to Rachel Palmer and the fleet-footed winger cruised around the covering defence to run in under the posts and added the conversion.

Three minutes later the score was doubled when Sandra Keegan made a blistering break to race in under the posts from deep inside her own half and again the conversion was added on.

Portlaoise were not even hampered by losing Sarah Miller after just five minutes to a bad looking ankle injury to be replaced by Denica McGrath. It is just hoped that she can make a speedy recovery and get back into the action.

Rachel Palmer sped to her second try in the sixth minute before Jenny Keegan crossed the whitewash again and both tries were converted for good measure.

Play became a bit disjointed them and with a few injuries disrupting proceedings the try scoring dried up a bit.

However, before the half time break Rachel Palmer again showed her pace when outstripping the Garda covering defence to score her third try. This time the conversion came from scrum half Sandra Keegan

Sandra Keegan continued with her good play in the second half scoring another try which she also converted.

The scoring was rounded off when replacement prop Aoibheann O’Sullivan got the touch down.

Lynn O’Callaghan was named player of the game just edging out Sandra Keegan for the accolade.

Portlaoise have a break of a week now but will need to be at their best when they must travel to Naas on Friday 29 October for a game under lights.