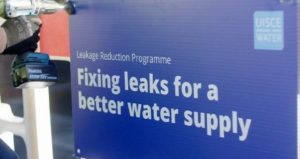 Representatives from Irish Water are to be again asked to come before councillors in Laois to explain how they calculate fees they charge to people and developers and problems with pumping stations.

He said: “We need to talk to Irish Water, to the person in it, who is drawing up these high charges for connections.

“Laois County Council is not charging anything. All we’re doing is collecting money for Irish Water. The amount of money being charged for connections is outrageous.

“There’s also problems with pumping stations. We’ve had the situation where people have been handed over the keys to their houses, but who are still not connected to pumping stations. All I want are straight answers from these people in Irish Water.”

Cllr Catherine Fitzgerald said: “The cost is one thing, but we still need the infrastructure to be put in and need to know who is responsible for the installations?”

Cllr James Kelly said: “We need to know from Irish Water what proposals there are for Laois and is the water in Laois fit for purpose?”

Cathaoirleach of the council cllr Conor Bergin said: “It is important that we meet with someone senior from Irish Water to come before us and give us some answers.”

“Irish Water is not being held accountable. We need to know who is running the show,” said cllr Ben Brennan?

He said: “It seems to me that the county council is doing all the work. If I have a problem I ring Irish Water who in turn send out Laois County Council.”

Cllr Caroline Dwane Stanley said: “There’s a growing population in Laois and the construction of more houses is needed. We must ensure that there is proper infrastructure in place to cater for that.

“Before outages (water cut-offs) we had a direct phone line to Irish Water. Now we can’t contact them by phone and they won’t answer our emails.”