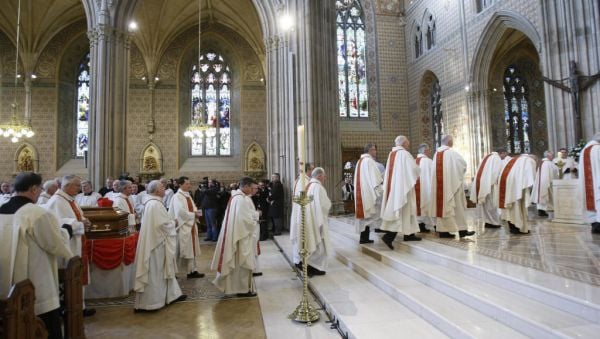 Nine new students have begun their studies for the priesthood for Irish dioceses — a drop of four on last year’s number of 13 men.

The new intake means that there are now 64 seminarians currently studying for the priesthood nationwide.

In 2017 only six Irish men signed up for the priesthood — a 222-year-record low. Maynooth, which opened in 1795, was once the largest seminary in the world with space for 500 men to train to become priests.

The Pontifical Yearbook 2021 and the Annuarium Statisticum Ecclesiae 2019 released in April this year shows that the number of priestly vocations are decreasing, with a decline of 1.6 per cent.

The number of Catholics is increasing in the world standing at 1.345 billion equal to 17.7 per cent of the world population.

Five years ago a report compiled on behalf of the Diocesan Priests Council in Ireland highlighted that priest numbers will drop by as much as 70 per cent by 2030 in the Archdiocese of Dublin.

The report set out the future trends for ministry and personnel numbers over the period 2014-2030.

The best-case scenario predicted a decline in priest numbers of 61 per cent, from 369 priests down to 144, provided religious orders maintain their current level of commitment in parishes.

However, if religious orders were to relinquish the parishes they currently serve, due to the ageing profile of their own priests, the drop by 2030 would be 70 per cent, leaving just 111 priests carrying out parish ministry across Dublin’s 300 parishes.

At the other end of the scale, 57 per cent of the current priests serving in Dublin are over 60 years of age and this is projected to increase to 75 per cent by 2030.

The study warns of greater strain on younger priests with an increased workload as only 25 per cent will be under 60.

Potential options to stem the decline in the number entering the priesthood are the recruiting of new priests from overseas and making it increasingly attractive to priests who are over 75 to remain involved in some capacity.

The number of actively working priests in Ireland is now believed to be as low as 1,900. In 2004, records show there were 3,141 priests in Ireland and this number has steadily declined through the past ten years, reaching 2,627 priests in the latest available records in 2014 from the Annuarium Statisticum, the statistical yearbook of the Church.

There are four stages of what is called initial priestly formation, three of which take place in a major seminary. These three stages include studies in philosophy, theology and pastoral ministry.

The Propaedeutic Stage is a distinct stage that takes place in a recognised seminary, approved by the Holy See and the relevant Bishops’ Conference.   Upon completion of this programme, the seminarian, with the nomination of his bishop, then applies to a seminary to continue his formation for an Irish diocese.

The number of Catholics is increasing in the world standing at 1.345 billion equal to 17.7 per cent of the world population.

Commenting on the 2021 – 2022 intake of seminarians, Bishop Alphonsus Cullinan, chair of the Bishops’ Council for Vocations, said: “While we are all aware of the great challenges facing the Church and society at this time, we know also that God the all-powerful is always with us.  These formation figures released today offer us a sign of hope.”

In 2018, the Congregation for Clergy, in Rome — which has overall responsibility for seminary formation — issued a new document (Ratio), The Gift of the Priestly Vocation, which is the revised programme for seminary formation.  The Ratio strongly recommends to bishops around the world the introduction of a propaedeutic programme for new candidates who wish to discern their priestly vocation.

Father Willie Purcell, National Diocesan Vocations Coordinator for the Bishops’ Conference added: “Across the island of Ireland, the role we have as Vocations Directors is to help young people realise that each one of them has a unique calling from Christ, and we aim to support them in answering that call, particularly in the case of those who are discerning vocations to the priesthood or religious life”.