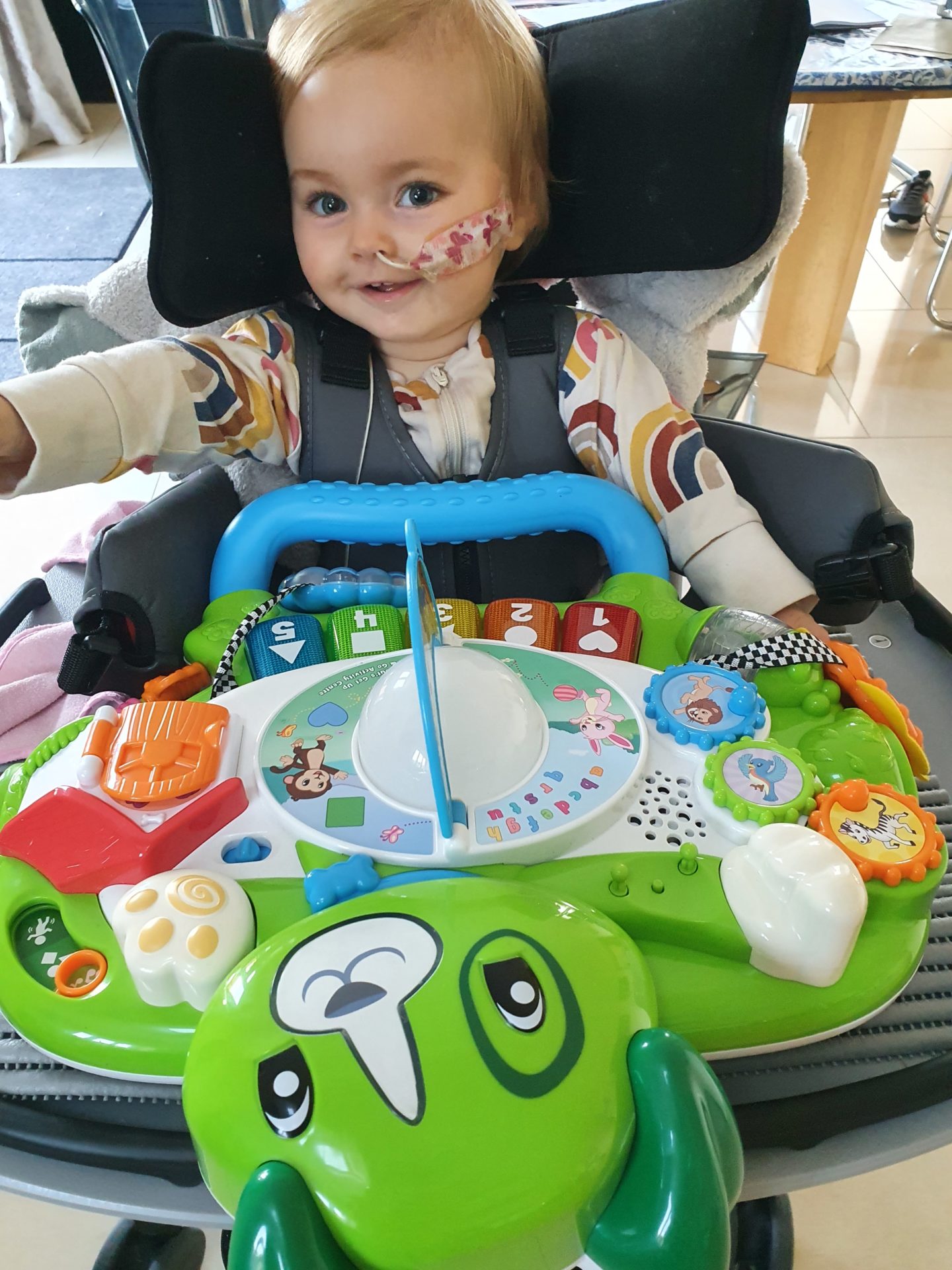 THE birth of a first child is always a nerve-wracking experience, even more so under the disruptive restrictions of lockdown that the country is only now emerging from.

But for one Durrow family, what should have been a joyous occasion became an emotionally charged ordeal after their baby girl was diagnosed with an incredibly rare genetic disorder.

Little Madison Gee – known by her proud parents as Maddie – was born in June 2020 to mum Gemma, originally from Leeds, and dad Gordon, who is a Laois native. Born during lockdown, Maddie needed specialist care and both mum and daughter spent seven days in hospital. After being discharged, Maddie began having mini-seizures and following several tests and reviews in Portlaoise and Temple Street, she was diagnosed with the rare genetic neurological disorder GNAO1.

There are four parts to Maddie’s condition: epilepsy, movement disorder, low muscle tone and developmental delay. Speaking to the Laois Nationalist, Gemma revealed that Maddie is affected in all areas.

Maddie has now just turned 15 months and Gemma is pleased to report that, despite obvious care difficulties, things are starting to look up for the family.

“We’re working quite well at the moment. We can’t just leave Maddie with anyone locally; everyone was scared of her seizures in the beginning, but we have a registered nurse and she’s great with Maddie and Maddie loves her as well,” says Gemma.

The couple are fortunate to have the assistance of a qualified nurse through the Jack and Jill Foundation, with 25 valuable hours’ care provided to the family for little Maddie’s needs.

“We can chop and change how many hours we use per day or per week, and have been using it maybe an afternoon a week for three or four hours, so we can get the shopping done or the jobs done without taking Maddie around,” explains Gemma.

“We’re both working at the moment and both taking a day off from work. There are just so many appointments that it made more sense and I didn’t want to put Maddie into creche for too long. She goes to creche for three days during the week and she loves it, she loves seeing new people and all the little kids. She’s so nosey and intrigued into everything that’s going on. The stimulus is so good for her.”

Two staff members in the creche are trained in Maddie’s care needs, meaning they are able to recognise if Maddie should suffer another seizure.

“She hasn’t had a seizure since last year, but they’re aware of what to do. The only problem is, if one of the girls is out, they can’t take Maddie into the creche. If one was out, they’d have to reduce their numbers anyway, because there’d be too many children,” says Gemma.

The condition is so rare that Maddie is the first child in Ireland to have been diagnosed with it, and there are currently only two other confirmed cases in the country.

“We’ve been in contact with the other two families via Facebook, and there’s the worldwide Bow Foundation if you need any help. There’s nothing face to face or any meet-ups, it’s all online at the moment.”

Gemma explains that Maddie is currently on medication for her epilepsy and something to help her sleep. Concerning future care provision, if her condition deteriorates, a number of possible treatments are available.

“If her movements continue to get worse, there will be some kind of medication she can take. Down the line, what works for a lot of children with Maddie’s condition is deep-brain stimulation, used for a lot of Parkinson’s patients. Maddie does all this extra movement, she’s always wiggling, always on the move, and she can’t control these movements. If it gets worse, they will consider DBS. That will have to be in England, as there’s nothing like that in Ireland. Hopefully that’s a long way down the line.”

Family and friends have thankfully now been able to visit and meet Maddie due to the lifting of travel restrictions, with Gemma’s best friend visiting as recently as August.

“My family have been very good and have been over and back. My sister came for Christmas and left in March, so that was a great help. But they have to go home at some point!” she laughs.

Throughout October, the Jack and Jill Children’s Foundation is urging people to go Up the Hill for Jack and Jill and donate €18, which is the cost of one hour of specialist home nursing care, to support local families like the Gees, who have an uphill challenge in caring for their very sick child at home every day. Anyone wishing to get involved can sign up at www.jackandjill.ie. 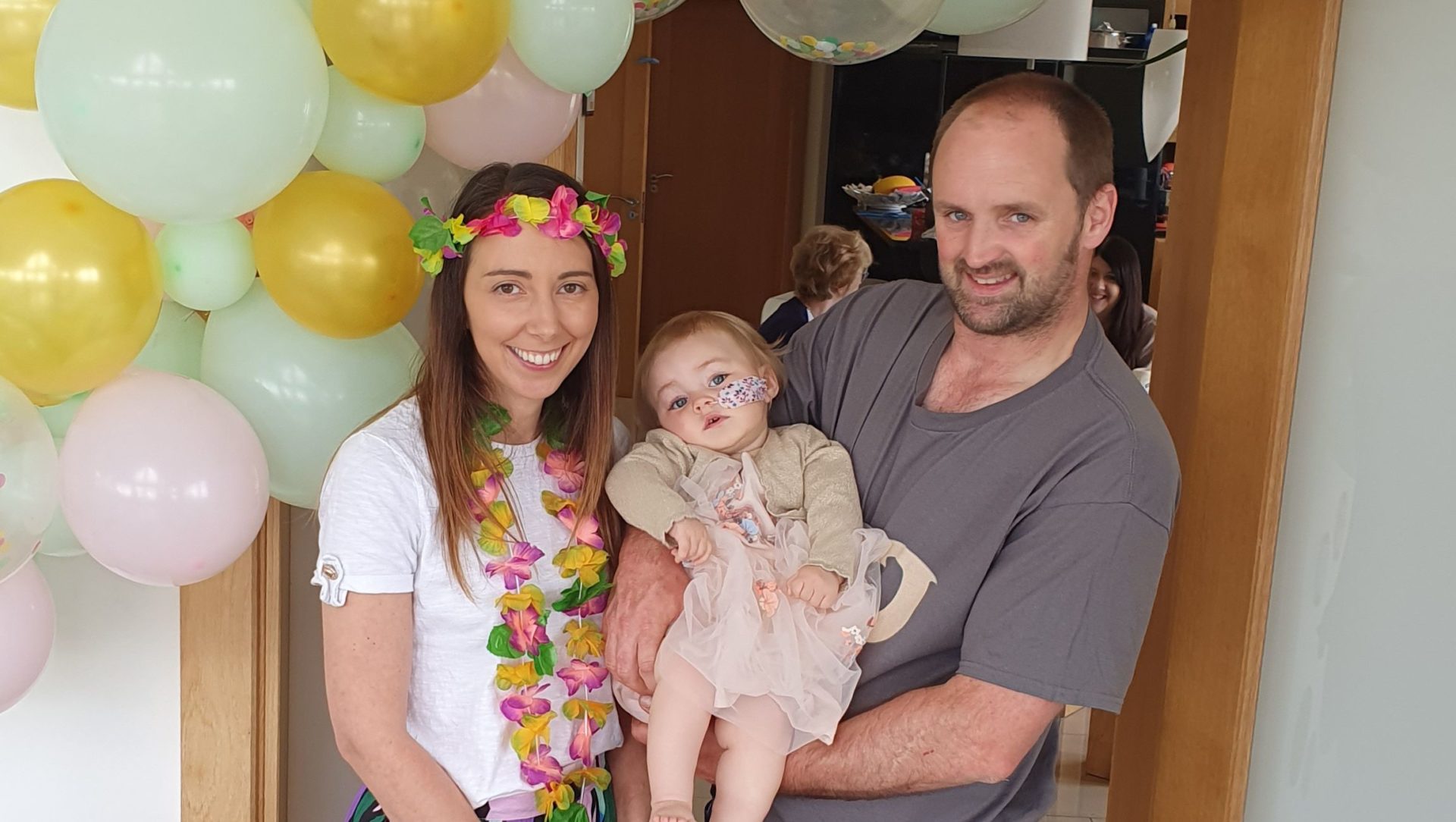 Maddie Gee with her parents Gemma and Gordon