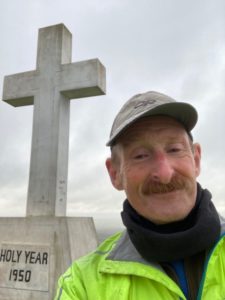 Tom  Cox at the Holy Cross in Sliabh Bawn

A LITTLE over a week ago, we were spending some time in my native Roscommon. In a run of unseasonably kind weather, I had reacquainted myself with my favourite cycling routes and decided to branch out and explore the possibility of some hiking trails.

On my cycling travels, I had come across signs for Sliabh Bawn Recreation Area and I decided to make a quick foray, just to check the place out. I did, however, have the good sense to trade in two wheels for four for the purpose. Not too many miles after turning off the Roscommon/Lanesborough road, I patted myself on the back for that decision – the final few miles of road rising rather steeply to my destination.

As I pulled into the parking area, the weather was turning, denying me the spectacular views I envisaged. There was enough visibility, though, to explore some of the trails. A sharp ascent from the car park and up through the surrounding forestry, I was offered a choice – a signpost, as I exited the tree line, showed the summit to my right, and Holy Cross to my left. It was an easy choice. The summit trail very quickly disappeared into the mist, making the Holy Cross trail the better prospect.

Though I was alone on the mountain, the presence of picnic tables led me to conclude that, on a better day, I might have had company. The gravel trail was rising gently enough, and a communications mast ahead poking out of the mist was a good indicator that I was nearing a high point and a decent phone signal.

Just beyond the mast stood a concrete cross. The white cross, of plain construction, though dwarfed by the nearby mast, was an imposing structure. The inscription on the plinth simply states: ‘Holy Year 1950’. An adjacent information board filled in some of the gaps in my knowledge.

The cross is located on a central peak of Sliabh Bawn and was constructed to commemorate Holy Year 1950. A local committee organised the construction and raised funds through local contributions. The cost of materials was £24. The work was carried out, for the most part, by locals, and I think it would be safe to assume their contribution came gratis.

This was no small task. Whereas I was able to drive on tarred roads to a car park, no more than a few hundred yards as the crow flies from the cross site, back in the winter of 1950-51 there were no forestry roads on the mountain. Aside from main routes, tarred roads were few and far between. Horse and donkey were employed to carry the sand, gravel and steel for the construction, and shank’s mare was the mode for the meitheal. The completed cross was unveiled by the parish priest of Strokestown, Fr Kilroy, in the spring of 1951. (And a caution to all you explorers who desire to be the first, in this instance truly, Kilroy was here!)

So what of Holy Year 1950? You will forgive me when I tell you that, until I rounded the bend in the trail on Sliabh Bawn, I was blissfully unaware of 1950 as a Holy Year. In my defence, I didn’t arrive on the scene until 1953. Although, technically, I was born within sight of the cross, I wasn’t in the habit of gazing out windows in those early years. Indeed, I doubt if my poor mother had much time for gazing over towards Sliabh Bawn, though from our third-floor flat in Castlerea, I expect she might have had a clear view of this recent arrival in the Roscommon landscape.

Holy Years, it seems, are a thing ever since Pope Boniface declared one in 1300, it being the 1,300th anniversary of the coming of the Saviour. Originally, Holy Years were to occur every 100 years, but after a few centuries, we got a little impatient and the timescale was shortened to every 50 years. In some parts of the world, they occur every 25 years. Laterally, there have been other adjustments. It seems you can have an ‘extraordinary’ Holy Year. Such was the case in 1933, when Pope Pius XI declared a commemoration of the 1,900th anniversary of our redemption, through the death of the Saviour. Indeed, the recently-canonised Pope John Paul II called an extraordinary Holy Year for 1983, the 1,950th anniversary of our redemption.

But what exactly is a Holy Year? At its most basic, it’s a reset button, urging us to focus more on being good Christians. But it came with inducements. Most popularly, a plenary indulgence was up for grabs. But there’s no such thing as a free lunch, even in a Holy Year. You had to earn this coveted prize by undertaking a pilgrimage to Rome, and there, among other requirements, visit a number of basilica. And this was not just for us in Holy Catholic Ireland, it was global. But in Ireland, it seemed to grip the nation. President Seán T Ó Ceallaigh led a national pilgrimage to Rome, and our national carrier, Aer Lingus, included in its winter schedule for 1950 a special return fare of £54 from Dublin or Shannon to Rome.

Of course, the prospect of flying to Rome was out of reach for the majority of the population, but the next best thing seemed to be the building of crosses on vantage points across the country. A bit like the summit of Sliabh Bawn on the day I visited, the author of the decision to place crosses in the landscape is lost in the mists of time, but most of the crosses have survived.

The Ireland of today bears little resemblance to the Ireland of the 1950s, and the winds of change are no more pronounced than on the very mountain where the 1950 Holy Year Cross in Roscommon was constructed. Once a solitary monument, visible from much of Roscommon and many of its neighbouring counties, the cross, now surrounded by wind turbines, is difficult to pick out. No doubt revered in the local area, where scarcely a family will not have a direct connection to its construction, the cross has stood for better than 70 years. Though it will be of little consequence to me, let’s hope, 70 years hence, that the cross will still be looking out over the Roscommon landscape and beyond and giving the odd explorer pause for thought.