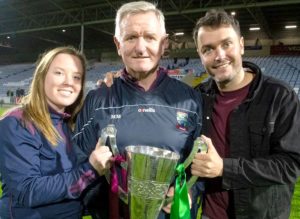 I SUPPOSE it’s only natural that when you have managed clubs to four Laois senior football county titles that the topic is brought up, and so it was with Martin Murphy on Sunday. But the self same Marton Murphy was quick to say this latest win, and in deed all of his wins had little to do with him.

“I’m very proud of the boys, very proud to be involved and it’s their day. It’s a fantastic achievement to win two championships, back to back in the space of 13 weeks.”

And so that topic was knocked on the head.

But one way or another is was a magnificent achievement to win back to back title, particularly given the times that are in it.

“It’s 13 weeks now (since the 29020 final) and we almost have the minutes and seconds counted at this stage. We’re just over the moon, thrilled, this is a fantastic achievement and it was topped off with a fantastic display today.”

And what a display that was, many in the large attendance were describing it a once of the one best ever team displays in a county final.

“Look that’s in them the whole time. It was in them against Emo too (in the semi-final). If you look at the chances we created that day and the chances we missed and only coming out with ten points at the end of the match, we went away a bit disappointed. We got down to brass tacks the Tuesday night after. We had a serious discussion as to what went wrong and we put it all to bed here today,” said Martin.

“We’ll enjoy this now for a few days and then prepare for the Leinster in two or three weeks time.”

It somewhat surprising that Martin was of the opinion that the team may not have been playing to their potential this year.

“It’s probably the first game we got right this year since the county final earlier. We probably came in a bit under-cooked in all our games even though we won quite well. Our defences were winning the game and we probably weren’t hitting the heights in terms of scores, but we’re thrilled that things came good at the right time.

“Portlaoise are never an easy team to beat. Maybe after their game against Ballyroan (in the semi-final), they may have thought they were in a better place than they were. We knew coming in today that we had the winning of that game and that we were going to keep the Jack Delaney Cup in Portarlington.”

In recent times Portarlington may hve gone near winning the title but could never cross the line. Now that they’ve done that not once, but twice, couldthins be the start of something special?

“Realistically we should have been going for three in a row today. We used that as a stick to beat ourselves. We won the 2020 championship. Maybe the quick turnaround suited us. The 13 weeks were fairly labour intensive, a lot of work was done and I was hoping we hadn’t fatigued a little bit.

“But they showed today there is plenty of energy on those legs. If we get a run in the Leinster championship these guys could go the whole way.

“In fairness I told the lads, ‘you’re county champions, go out and enjoy the day’. We didn’t get the opportunity to walk behind the band back in August, there was no pomp or ceremony or lead in. We had only six days lead in to that final in August. We just basically met in the field and kicked a few frees, kicked a few points and we were ticking over.

“Now we had this two weeks lead into this final and I think the lads really enjoyed it, soaked up the atmosphere, certainly that roar they got from the Portarlington support when the ran out today really inspired them and drove them on.”