Portlaoise are wiped out by rampant Portarlington 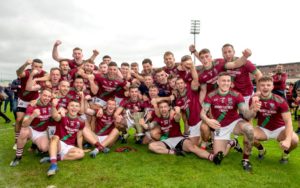 PORTARLINGTON came into this final as hot favourites to retain their crown but few, if anyone, envisaged just how comprehensively they would kill off what was a pitiful Portlaoise challenge.

Maybe the public had been duped following the semi-final displays of Sunday’s protagonists. Portlaoise had brushed aside Ballyroan Abbey with a display that bore marks of how they used play. Portarlington struggled against Emo, albeit in horrendous conditions. So people tried to make up their minds – were Portlaoise on the way back, were Portarlington’s standards dropping. As things turned out, nether considerations were correct.

The is that on Sunday Portarlington served a style of football that has not been seen in MW Hire O’Moore Park, surpassing their opponents’ displays even when at their best.

This Portarlington display had everything. They were happy to soak up whatever Portlaoise had to throw at them and in fairness that wasn’t a lot. Portlaoise never looked like they would get a clan break against a very structured defence, and six points over the course of the game tells its own story.

In contrast, Portlaoise had no answer to Portarlington when they attacked on the counter, doing so at pace and incisiveness. They tore Portlaoise asunder making their defence look very flat-footed and hesitant.

Even given the way Portarlington burst out of the blocks, scoring a goal and three points in the opening seven minutes, suggested what was to unfolded over the rest of the game.

Just under three minutes in David Murphy got Portarlington off the mark taking a pass from Ronan Coffey. And it was Coffey who landed number two rounding off a five-man counter attack.

Even at this early stage you could see the frustration of Portlaoise players and sideline as decisions went against them.

Six minutes in Colm Murphy won possession, drew a defender before slipping to ball to Adam Ryan on the burst and he drove low and hard beyond Graham Brody.

Ronan McEvoy had a glorious chance to get Portlaoise off the mark but pulled the 20 metre free wide of the target. Eventually Paul Cahillane opened his side’s account in the ninth minute but he would depart the scene five minutes later with an injury.

McEvoy made amends for his earlier miss when landing an excellent point from out on the right but his score was cancelled out by a Jake Foster that left Portarlington leading 1-4 to 0-2 at the first water break.

The ten minutes after the restart became very scrappy and while Portlaoise were winning more possession their finish was atrocious, kicking three successive wides. Meanwhile Foster extended Portarlington’s lead from a free.

A Colm Murphy free was to be our first score in 12 minutes and he added another after making an excellent mark.

Two minutes from the break the destiny of the Bill Delaney Cup was effectively decided. Colm Murphy linked Rioghan Murphy and passed to Adam Ryan. Colm Murphy had continued his run and Ryan popped the ball over the top to him and the Portlaoise net was rattling again.

The best Portlaoise could mange during this period was another three wides as they went into half time trailing 2-7 to 0-2. When last had Portlaoise only scored two points in a half?

The new half started with Foster and half time substitute Ricky Maher exchanging frees. Ten minutes I their was another exchange of points, this time between Gareth Dillon and Foster.

By the second water break Portlaoise had reduced their deficit by a point, thanks to Ricky Maher but Portlaoise never looked like reeling in a 10 point deficit in the final quarter, and they didn’t, quite the opposite in fact. Minutes after the second water break Coffey sent Ryan away. He crossed to Colm Murphy who moved on to his brother David and he calmly slipped the ball under Graham Brody for Portarlington’s third goal.

The best Portlaoise could mange was a Benny Carroll point but Portarlington wee not finished yet.

Three minutes from time Keith Bracken linked up with Jake Foster and when the latter passed the ball across the Portlaoise goalmouth Colm Murphy was there t palm it to the net.

Game, set and match to Portarlington who now await their opposition in the opening round of the Leinster club championship after the Westmeath final ended in a draw on Sunday.