‘We’re not just team mates, we are friends’ – David Murphy 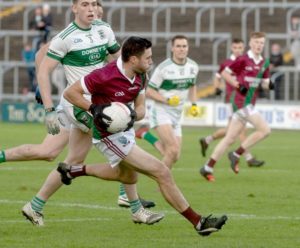 I MAY even have alluded to it himself, that me might be one of the elder lemons of this Portarlington side, but looking at him in action in MW Hire O’Moore Park on Sunday I’d say there’s still plenty of gas in David Murphy’s legs.

It;s not that county titles are like buses, once one comes along a second follows tght behind. In Portarlington’s case that is exactly, the second coming just 13 weeks after the previous.

“It’s great to get it, god knows we waited long enough to get the first one,” said David Murphy after the game.

“Look, there was a lot of talk during the week that we mightn’t have been where we were last year, but we knew different. We know each other and that we’d back each other, from one to 30 and we were never in doubt, and that’s no disrespect to Portlaoise. We knew where we were and what we were building towards,” he added.

Without doubt one of the reals strength of this sides is the panel and the quality of the subs they can introduce. I’d comfortably say that any of the subs introduced on Sunday would walk in on to most club teams, something David concurs with.

“I’m playing long enough now and sometimes you’d nearly feel bad for some of the lads because I know of teams in the past when they would have been main players on it. That’s how good they are. A lot of them are still young and their time will come. There may be some of us, myself included, heading away. They are super footballers and I know they won’t give up.”

David word but I would be banking on seeing some other player filling the number 14 jersey in the near future.

And what about that reception he received when substituted in the 50th minute, less than a minute after scoring a goal.

To a man, woman and child, every Portarlington supporters rose t their feet and gave David a reception I can’t recall any other player getting.

“It was nice. As I was saying, I’ve been around a long time so it was nice to get that recognition at the end. I don’t like coming off but it nice that way today.”