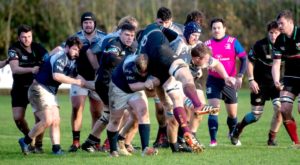 PORTLAOISE dropped to seventh place in Division 2A of the Leinster League after shipping a heavy defeat in Togher on Sunday. Despite the fact that the loss was to second placed De La Salle Palmerston, it was the nature of the loss that hurt most.

The way Portlaoise started this game, and played for the opening 30 minutes or so, did not suggest the result would be as it was at the final whistle. They were mixing it well with the south Dublin side and holding their own.

Maybe it was the lack of a few regulars and the fact that they lost team captain Ross Cooper with a knee injury as early as the seventh minute that was to tell in the end.

Portlaoise came within inches of opening the scoring in the first minute. When a DLSP clearance kick was blocked down, Portlaoise full back Iain Corrigan hacked the ball on. Out half Niall Keenan gave chase and just as he was about to touch the ball down a DLSP defender kicked the ball to safety from under his hand.

But the home side not have to wait long to take the lead after a DSLP player was judged to have illegally entered a ruck and Jack Reddin converted the resultant penalty with just three and a half minutes on the clock.

Despite DLSP have the aid of the stiff wind, Portlaoise defended stoutly with both forwards and backs putting in some great tackles. It has to be said they got a touch of the green on a couple of occasions when the visitors scrum half was wayward with a couple of penalty efforts.

The visitors mad the breakthrough on 22 minutes when they broke from midfield and with numbers down the right their centre scored under the posts with the conversion being added.

With four points separating the sides, Portlaoise would have been happy enough to have held on to that until half time. However, from a 34th minute line out DLSP mauled the ball over the line for their second try and conversion.

Portlaoise reacted positively and pressurised the visitors’ defence in the run in to the half time break but unfortunately get over the line.

It’s unusual to say, but the result was decided a couple of minutes into the new half. Portlaoise needed a good start but it was DLSP who got it when from another line out the mauled over for a try and conversion.

This gave the visitors the confidence to go on something of a rampage. There task was made that bit easier by Portlaoise’s concession of penalties and their indiscipline was further compounded when on a few occasions they were penalised a further 10 meters for challenging the referee’s decisions.

By the 65th minute DLSP had added 15 points to their tally and while the outcome was well and truly decided Portlaoise kept battling away. They were to be rewarded when Niall Keenan scored a beauty of a try when he chipped over the cover and collected the ball and run in under the posts. Jack Reddin added the extras.

They might have scored another try but in the end it was the visitors who last cross the whitewash.

Next week Portlaoise head to Wexford where the take on the home side who are bottom of the table. They visitors will surely be targetting the points down in the south east.