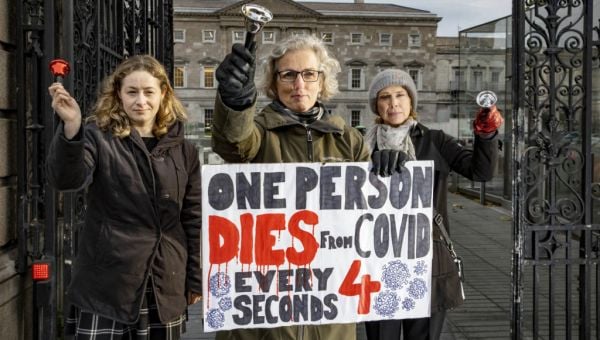 Ireland is supporting a “rich country stitch up” over Covid-19 vaccine patents, campaigners have said, with intellectual property rules creating “an artificial scarcity” of vaccines and treatments.

Talks are ongoing at the World Trade Organisation (WTO) TRIPS Council over a temporary waiver on intellectual property rights on Covid-19 vaccines and treatments, which would allow states to temporarily authorise the production of patented vaccines.

After initially opposing this “TRIPS waiver”, which is supported by more than 100 countries, the European Union has tabled a counter-proposal to use flexibilities in existing WTO rules.

The People’s Vaccine Alliance Ireland, whose members include Oxfam Ireland, Amnesty International Ireland, Trocaire Doctors for Vaccine Equity and Access to Medicines Ireland, said the EU is taking a stance against vaccine equity – supported by the Irish Government.

On Tuesday afternoon, campaigners from the group gathered outside the Dáil to stage a mock funeral procession in protest of the EU stance.

A bell was tolled every four seconds, signifying someone dying from Covid-19 every four seconds. Minute-long silences were observed while the bell rang, “to honour those who passed away but might have been saved with timely provision of vaccines,” the group said.

Jim Clarken, CEO of Oxfam Ireland, said the emergence of the new Omicron variant, first identified in South Africa last week, “is clear evidence that the only way to end the pandemic is to vaccinate the whole world.” 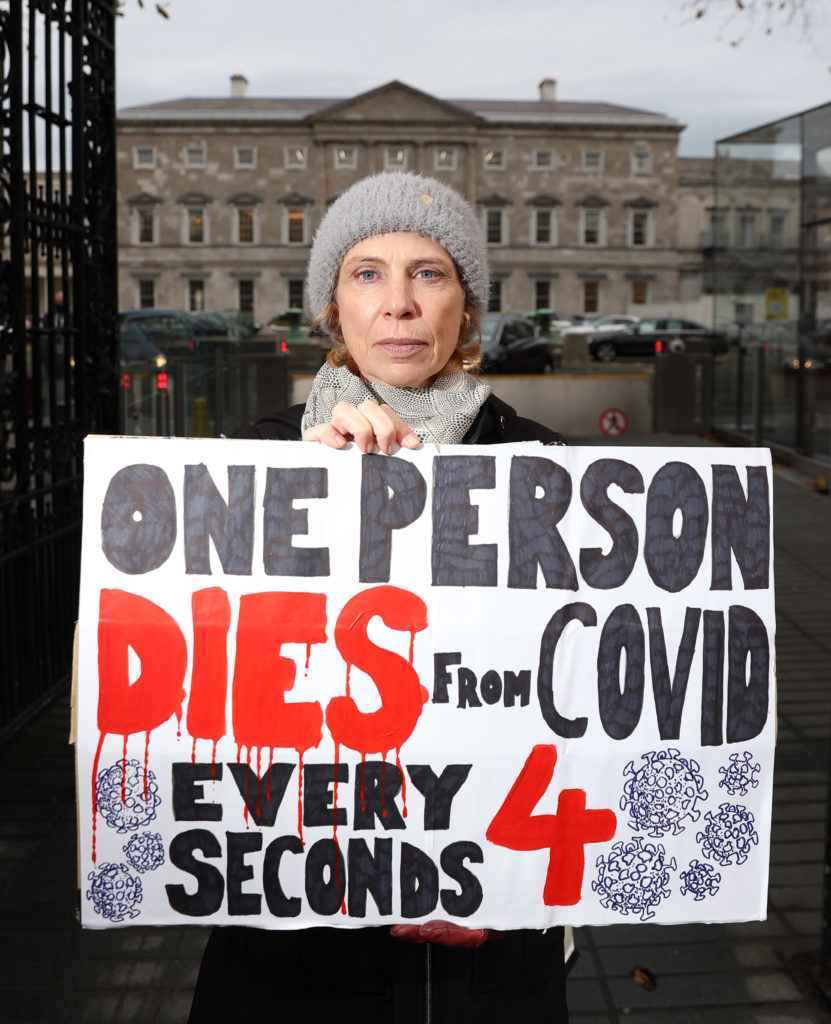 “Rather than granting developing countries manufacturing rights and ensuring people get vaccinated to cut off new variants… the best response they can muster is to put up walls to a variant they have allowed to develop,” he said.

At current rates, the group said just eight per cent of people in low-income countries will have received at least one dose of a Covid-19 vaccine by the end of this year. This compares to 76 per cent in high-income countries.

A call coordinated by the alliance, urging the Government to support the generic production of Covid-19 vaccines and treatments to address global vaccine inequity, has been signed by 400 scientists and medical professionals including Prof Kingston Mills, Prof Sam McConkey and Prof Luke O’Neill.

“The Covid-19 pandemic has killed at least five million people and impoverished hundreds of millions more. Without access to Covid-19 vaccines and treatments, many more will die in low and middle-income countries purely to ensure the profits of pharmaceutical companies,” he said.

“This is not just an ethical debate. As well as being the right thing to do, ensuring global access for all to vaccines, life-saving therapeutics, diagnostics and other medical tools is the only way to end the pandemic.

“Without generic vaccine production, we will continue to see variants emerge, which may be vaccine resistant and place us all at risk.”

A meeting of the WTO TRIPS Council, which is dealing specifically with the TRIPS waiver issue, took place on Monday, but reached no agreement on whether to support calls for a TRIPS waiver. Further meetings are scheduled for early December.

The TRIPS waiver was first proposed by India and South Africa – two countries with robust generic pharmaceutical manufacturing capacity – in October 2020 to address the availability of vaccines and therapeutic treatments, but was initially opposed by countries including EU nations and the United States.

The US has since voiced support for a waiver covering vaccines only, maintaining intellectual property protection on other products such as treatments. US President Joe Biden reiterated his belief in the waiver for vaccines on Monday, saying news of the Omicron variant raised the importance of moving quickly.

Man due in court over murder of Ashling Murphy