Jeremy Clarkson, Richard Hammond and James May on their latest adventures in France 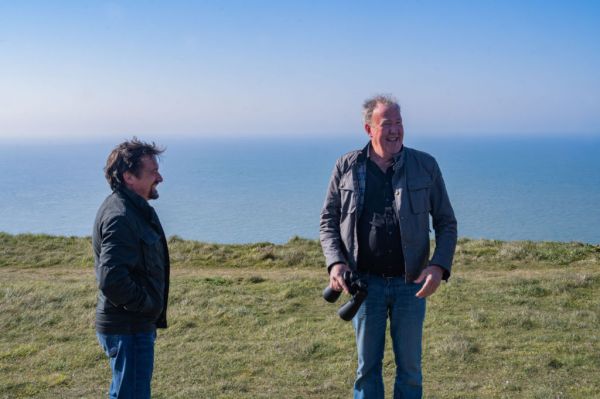 It’s tempting to greet James May with a cheery “Bonjour” given the topic of discussion is about to centre around a recent French-themed expedition, but the TV presenter and car expert is quick to set the record straight: “I’d get confused because that’s French and I’m actually in Italy,” he quips.

He’s back on the road, and has been filming for his Amazon Prime Video travelogue series, but it’s rather his escapades with Jeremy Clarkson and Richard Hammond for the latest instalment of The Grand Tour that place us firmly back in a French mindset.

The trio are back with the second of their lockdown specials in the motoring series, with this one titled The Grand Tour Presents: Carnage A Trois, and sees them taking a deep dive into the world of French car culture.

Filmed during a road trip that started in the Welsh hills, due to uncertainty around travel restrictions resulting from the coronavirus pandemic, the episode is not short of stunts and hair-raising moments which include a mountain climb via car and more.

“I’ve often thought we should do these things where we have a theme, (it’s) sort of, in a sense, slightly old-fashioned,” 58-year-old May explains.

“It’s like the old magazine formats and TV shows. I’m in the position of being the only person on our show who actually owns a French car. So I feel like I’m on perfectly safe ground talking about the French being a bit weird, and a bit quirky, because I’ve embraced it… so, you know, no complaints from me.”

For Clarkson, 61, it was a chance to examine the quirkiness of the French automotive world.

The car expert, recently turned farmer for another Amazon Prime Video series, explains: “We live in a homogenised world. Everything is the same, everybody eats at McDonald’s, everybody has an iPhone. It doesn’t matter where you are in the world, there are reference points for all of us. And yet, the French, they don’t think like us – and when I say ‘us’, I mean the whole rest of the world.

“Even today, if you tell them they’ve got to make an ordinary, straightforward hatchback that will sell to millions of people all over the world, they’ll put the steering wheel under the dashboard or do something which is unconventional.”

But then doing things out of the ordinary is something the trio, who have worked together since fronting Top Gear in the early 2000s, are no strangers to.

“And we sort of can anticipate what one another is going to say and something might make me laugh that’s happening just because I know it will make one of them laugh and make one of them cross. So we get so much more out of a situation for that reason.”

Speaking of which, in the forthcoming episode, viewers will see Hammond has not lost his daredevil streak when he volunteers for a particular drive.

“I think I’ll always be 10 years old at heart,” he says grinning slightly.

It’s something to be admired, and, when it comes to the French theme, Clarkson’s admiration lies in a different area.

“The French shrug is something I admire very much when they can’t be bothered to help you,” he says. “I’ve been stopped a couple of times by the French police, and you plead and beg, and they just shrug at you. They don’t care. So I very much enjoy France – always have. It’s one of my favourite places.

“I’ve holidayed there more than anywhere. And all of it, from the south and south-west, the Dordogne I went to most recently, Brittany, it’s all paradise.

“Paris is a bit weird, but there’s so many absolutely fantastic places all over the country. I love French wine, French food, and the French way of life. I actually like their belligerence. I admire the way that they don’t accept government edicts, and they burn the speed cameras. There’s much to admire.”

May describes it best when he says the French are “not interested in cars”.

He explains: “I described them (cars) as being like personal effects. They’re like a pair of trainers, they’re something that has to be broken in and then used until they fall apart. That’s the French view of cars. Richard goes on about this quite a bit. They are designed to be used in that way.”

But what will the French think of this particular Grand Tour special?

“God knows,” Hammond says, adding: “But, actually, I hope they take it in the way it was intended, which was to set out to answer the question, ‘What is wrong’ – from our point of view – ‘with the French?’

“And then we discovered that, actually, many of their points seem to be right, but you see that happen on screen.

“We genuinely didn’t set out to flatter – when have we ever set out to flatter? – but we accidentally stumbled across something we’ve discovered that the world must know; it turns out the French have a point.”