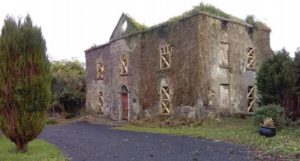 A major fundraising effort is currently underway to restore the ancestral home of James Fintan Lalor to its former glory.

When the house is fully restored, the Tennakill Restoration Committee intends to dedicate a room each to ‘Honest’ Patt Lalor MP and his three sons James Fintan, Richard and Peter to highlight their achievements.

Committee member Mary Carmody, who is organising the GoFundMe campaign, said: “The life story of any one of the above mentioned personalities would fill all of the rooms of the entire house. It is unlikely that, throughout the length and breadth of the country, the family of any house has produced a similar quartet who have had such an influence on the political and social life of Ireland, America and Australia. “To date, there is no venue in Ireland that honours and reflects their achievements. What better place to do that than in their own home, Tennakill House in Co Laois.” The life of Honest Patt Lalor MP, his stance against the hated Tithe taxes, his friendship with Daniel O’Connell, The Liberator (a regular visitor to Tennakill House), his opposition to the Act of Union, his contributions to the debates in Westminster and his establishment of the Reform Club are a remarkable testimony to his commitment to Ireland.

His eldest son James Fintan, despite indifferent health throughout his short life, is a giant among Irishmen, who displayed a fearless courage and spirit in highlighting the terrible conditions of the small landholders and the farm labourers. He was the first nationalist to link the land question to the national aspiration of freedom and independence. His writings and policies were popular with Padraig Pearse and James Connolly, two of the executed leaders of the Easter Rising in 1916, and with Eamon de Valera, later Taoiseach and president of Ireland.

Another son, Richard Lalor MP, was a land reform agitator, antiunion opponent and reformer of the Independence Club, set up by his father, Honest Patt Lalor. He was very involved in the local politics of the day both in Ireland and England and his contributions to Westminster debates would reflect attitudes to Ireland and the Irish nation in general and would make great study material for students of history.

Richard, like his brothers James Fintan and Peter, were all involved in the Young Ireland movement and took part in the abortive rising in Tipperary in 1848. What can be said of the other member of this illustrious quartet? Peter Lalor, leader and defender of the miners at the Eureka Stockade, fugitive from justice with a price on his head, later turned businessman and politician, who became a national figure in Australia and who is universally known as ‘The father of Australian democracy’. He was the subject of four films and a two-part television series about his involvement in the events at Eureka. He has streets, electoral divisions, public buildings and even university student accommodation named in his honour.

It was at the Eureka Stockade that the famous ‘Southern Cross’ flag, the unofficial emblem of Australia, first made its appearance, having been created by the women who stood by their men inside the stockade.

So why should such a house as Tennakill not be restored?

Mary said: “It has produced a quartet of remarkable people, but there are other members of that family who have also featured abroad and they are the three other brothers who emigrated to America and fought in that country’s Civil War. Many of the American Lalor family have been involved in politics in the state of Wisconsin and are still very much to the fore there. “The foregoing is a very short resumé of not four, but seven members of this family, which is surely a unique record, which must be commemorated by the restoration of Tennakill House.”

To date, more than €100,000 has been spent on the house, but to restore the building to its former glory will require many multiples of that amount, which the GoFundMe appeal hopes to achieve. The committee has received grants from Laois County Council, the National Heritage Council and has held many fundraising events. It is now making an international appeal to complete the work. The current owner of the house, Kevin Lalor-Fitzpatrick, a direct descendant of Honest Patt Lalor, has already made a considerable financial contribution to the work.

You can donate by logging on to the GoFundMe page here