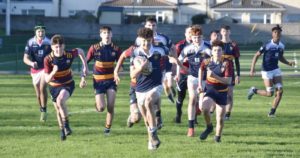 Jake Darcy leading the Portlaoise army to victory in Skerries

PORTLAOISE U/17’s travelled to Skerries in North Dublin for their final league game of 2021 and with Evan Caffrey and Jake Colbert in flying form, the men from the midlands made sure of the four points and finish the year joint top of the table.

Caffrey lead from the front in the pack with unselfish work rate and Colbert’s strong running with three tries and conversions gave him a personal tally of 23 points.

Portlaoise got off to a perfect start with Colbert driving through the Skerries’ defence on two occasions and tapping over the conversions to put his team 14-0 up after ten minutes.

Just when you thought it was going to be an easy day in the office Skerries struck back for seven points as they found a loose stone in the Portlaoise’s defensive wall.

Stung by that, Portlaoise started to play some lovely expansive rugby getting their wingers in to the game but it was Ivan Okonkwo, the Portlaoise flanker, who drove over the Skerries’ outhalf to extend the lead to 19-7.

Skerries then lost their prop to injury so the scrums went uncontested. This suited the home team as their forwards enjoyed the more free open game and quickly cut the lead to five points with a try.

Half time came at a good point for Portlaoise as it was time to regroup and focus and with fresh minds Portlaoise started in explosive fashion with that man Okonkwo scoring a similar try to his first after fierce aggressive tackling and ball carrying from Adam Glynn, Cathal Kenny and in particular Evan Caffrey.

Surely Portlaoise were home and dry now, but Skerries thought differently with them using their back play to great effect and avoiding the Portlaoise pack to score another try and narrow the gap yet again.

But the rest of the game belonged to Portlaoise as Skerries tired and Jake Darcy started to express himself. First of all, a perfectly judged kick to the corner for Paddy Reddin to run on to and tap down, then a delightful chip through the Skerries defence to gather it up himself and off load to PJ Larkin who found Dylan Kelly in space to add more points.

Finally Darcy pounced and intercepted a Skerries pass that saw him run under the posts for a well deserved try of his own.

Skerries wanted the final whistle to go but before it did Colbert wanted that hat-trick of tries and duly accepted the invitation when good work from Dylan Kelly orchestrated the play to set up his team mate.

With Premier League status well and truly deserved for 2022, the squad look forward to their next group of games starting on Saturday 9 January.