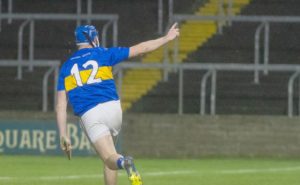 LAOIS hurling champions Clough/Ballacolla took another giant step towards adding to their laurels with a comprehensive performance at MW Hire O’Moore Park on Saturday evening when they overcame the Dublin champions Kilmacud Crokes in difficult conditions.

While the scoreboard showed only three points separating the teams at full time, Clough/Ballacolla were always in command and when the visitors threatened, the lads from the Hawthorne always responded.

Conditions were far from perfect for hurling but the Laois champions seem to adapt better once they got their noses in front. The two sides hit wides before Aiden Corby landed Clough/Ballacolla’s first point, that after Dublin county final hero Ronan Hayes posted the game’s opening score from a free inside two minutes.

Stephen Bergin and Caolan Conway swapped points and then the first major move by the home team. Crokes would have paid special attention to Stephen Maher after he picked up the man of the match award in the opening round, but before they knew it Picky slipped inside from the stand side and, although a defender attempted to cut out the danger, the sharpshooter blasted low and hard past the keeper.

Fergal Whitley responded with a point and Crokes hit a bad wide before Maher posted the next two points and already the Dublin team were struggling to cope with the Laois attack. With 15 minutes gone Jordan Walsh picked off a fine point and another from a Stephen Maher free edged to home team six in front.

A fine score by Cian O’Cathasigh cut the deficit to five at the water break.

After the break Crokes were winning plenty of possession but hit three bad wides before Oisin O’Rourke landed a long-range point. A Stephen Bergin responded and Jordan Walsh added his second and in between Ronan Hayes struck a free between the uprights and the visitors were coming more into the game.

The closing minutes of the first half were closely contested. Two from Stephen Maher, one from play and another from a free, sandwiched points from Fergal Whitley and Ronan Hayes, to leave the half time score at 1-9 to 0-8 in favour of the Laois champions.

As the teams returned there was a slight breeze but the ground conditions were deteriorating. Crokes missed an easy free almost from the throw in but Caolan Conway found the target three minutes later. Clough/Ballacolla were wide on their first attack but Picky Maher made no mistake from a placed ball ten minutes after the resumption.

Fergal Whitley replied from play and a Clough/Ballacolla wide was offset by a fine point from Brian Corby midway through the second half.

Then Crokes launched an attack down the left wing which resulted in midfielder Oisin O’Rourke sending a powerful shot past Cathal Dunne, his first three pointer to concede in the provincial campaign but he could do nothing to save it.

Now the visiting supporters were shouting aloud as they sensed a possible victory. With 14 minutes remaining a single point separated the sides.

The next score would be crucial and, who else but Stephen Maher supplied it. Crokes substitute Mark Howard offset that with a fine score from play and with 11 minutes remaining the margin was still a single point.

Stephen Maher converted a free and at the delayed water break Crokes trailed by two. Then Clough/Ballacolla had a wide and Cillian Dunne replaced Aiden Corby.

Both sides squandered chances but then came one of those defining moments. Willie Hyland fed Stephen Bergin and his powerful swing saw the ball sail between the posts from 60 metres out and that was followed by another exquisite strike from Willie Dunphy. Now you sensed the Laois champions would not be caught with five minutes remaining and four separating.

But Crokes had not gone away. Possession would be vital. Ronan Broderick came in for Mick McEvoy and after Ronan Hayes pulled a point back, another fine score by Stephen Maher restored the four point advantage entering the three minutes of time added on.

Ronan Hayes added a point from a free but that was the final action and Clough/Ballacolla celebrated another milestone in a spectacular year.

Kilmacud Crokes were a step up from the Wexford champions but still Clough/Ballacolla were able to handle the threat. They know that next Sunday will be another step up and they will not have much time to prepare. That said, they have been consistent since that amazing second half in the county semi-final and they will not worry.

This was the third visit by the Kilmacud Crokes club to Portlaoise two for hurling and one for football and on Saturday walked away for the third time empty handed and now they meet another Laois club on next Saturday in football in Croke Park.

Picky Maher was once again selected as man of the match and rightly so but this was another huge team effort and the eight points from the other five players were all huge scores.