Portlaoise lose the points but are more concerned about injured player 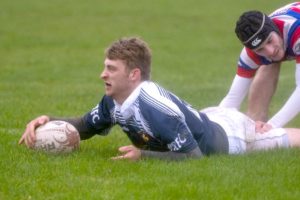 Martin Phelan scores a try for Portlaoise against North Kildare in the Leinster League game in Togher on Sunday           Photo: Denis Byrne

PORTLAOISE my have lost on Sunday to North Kildare but of more concern was the well-being of player Simon Williams. The wing-forward picked up an injury midway through the second half and play was suspended for close to an hour after an ambulance had to be called and the player treated.

Everyone in the club wishes Simon a speedy recovery.

As for the game itself, it was always going to be a difficult assignment for Portlaoise who went into it missing several players. In the pack alone they were without Ryan McEvoy, Eoin Keenan and team captain Ross Cooper.

That said, Portlaoise must have wondered how this game got away from them. After conceding a try in the fifth minute, they went on to totally dominate the possession stakes in the first half despite playing into the stiff wind. Most of this half was played deep inside North Kildare territory but the best the home side had to show for all their possession was an injury time try just before the break.

In contrast, North Kildare made four or five forays inside the Portlaoise 22 and came away with three first half tries. Most of the damage was caused by missed first time tackles that allowed the visitors get in behind the Portlaoise defence.

Portlaoise had a golden opportunity to open their account with 23 minutes on the clock after a great break by Martin Phelan. From a ruck close to the North Kildare line a Portlaoise picked but ran into one of his own players giving North Kildare a relieving penalty.

North Kildare might well have scored their second try three minutes later only to be denied by a magnificent steal by Simon Williams. They would add a penalty on the half hour mark and run in a brace of tries, both conceded by poor tacking, to go into the break leading 24-5.

The Portlaoise try on 42 minutes was a wonderful score. Full back Phelan ran on to a North Kildare clearance and went on a dazzling run before popping a pass to wing forward John Rogers. He made more ground before throwing out a ;long pass to Niall Keenan who ran in for the try.

The home side threw themselves a lifeline 16 minutes into the second half. From a scrum ten metres from the North Kildare line the moved the ball left. Replacement Joe O’Toole and Jack Reddin combined before sending James Rogers on a slicing run through the visitors’ defence. A quick delivery from the ensuing ruck sent Martin Phelan over in the corner. Reddin’s magnificent conversion from the touch line brought the score to 12-24.

North Kildare scored another try before play had to be halted because on William’s injury.

Ironically, Portlaoise played their best rugby on the resumption of play almost an hour later. They moved the ball with intent and for the first time on the day their back line began to make inroads into the North Kildare defence. They were rewarded when Sean Mullin danced his way past a few would-be tacklers to cross the line.

But that was as good as it would get for Portlaoise who must travel to Wexford next Sunday to play the game which was postponed a couple of weeks ago.