Rovers hold out for victory after late Killeigh rally 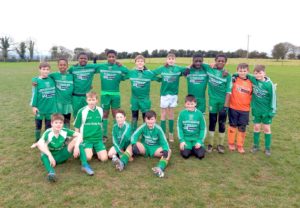 PORTLAOISE Rovers U/13s travelled to Killeigh on Saturday morning and came away with a deserved victory.

Portlaoise started strongly with a wind in their favour and had early chances through David Olaseni and Akatchi with the front pair of Jake Preston and Tawana Msesa causing the Killeigh defence a lot of problems. They were dominating the midfield with Adam Gavin and Daniel McCordick using the spaces provided to set up chances for their team mates.

Portlaoise went ahead after some great play between Azim Shitta and Tawana Msesa who found Akatchi in the box and his superb strike found the back of the net. Portlaoise doubled their lead when great play from Daniel who found Katchi who made no mistake for his second of the game.

Killeigh came more into the game but the Portlaoise back line of Issac Connolly, Cian Conway, Godfrey Cole and Cillian Horgan kept them in at bay. Portlaoise almost added to their lead before half time when a dangerous cross in by Alan Warachim was met by the head of Jake Preston forcing a good save from the Killeigh keeper.

The second half continued in the same pattern with Adam Gavin and Cian Conway controlling midfield while Callum O’Loughlin and David Olaseni looking dangerous up front. The wind was now blowing directly into the faces of the Portlaoise boys allowing Killeigh more possession and they started to create more chances. Some great defending from Jayden Cruidshank and Isaac Connolly along with great goalkeeping from Michael Osby kept them at bay.

Portlaoise had chances to increase their lead but it was Killeigh who got the next goal when a free kick on the edge of the box found the back of the Portlaoise net. This left one between the sides but as Killeigh pushed for the equaliser they found the Portlaoise defence too hard to penetrate and they held on to win.

It was another great team performance from Portlaoise who continue to improve as the season goes on.