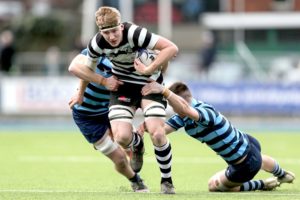 FORMER Portlaoise RFC player, Fionn McWey has been has been selected on the Irish U/20 rugby squad for a Six Nations warm-up game.

Fionn McWey has been named as one of the ten replacements for the game against Italy in an uncapped challenge match at the UCD Bowl on Saturday afternoon, kick-off 2pm.

Fionn, who has been capped by Leinster at U/18 level and was part of the Leoinster Development XV, attended Cistercian College Roscrea and now plays his club rugby with Old Belvedere.

And his sporting prowess extends beyond the oval ball. He played football and hurling, for Ballyroan Abbey and Clonad, respectively.

The Ireland U20s, sponsored by PwC, will step up their preparations for the 2022 Six Nations when they face Italy on Saturday.

Richie Murphy’s squad assembled for camp at the IRFU High Performance Centre this week, and Saturday’s hit-out against Italy in Dublin will provide a valuable opportunity for Ireland to build important cohesion.

The Ireland Head Coach has selected an extended match day squad of 25, ensuring as many of Murphy’s wider panel are exposed to game-time ahead of the Six Nations opener against Wales at Musgrave Park on Friday 4 February.