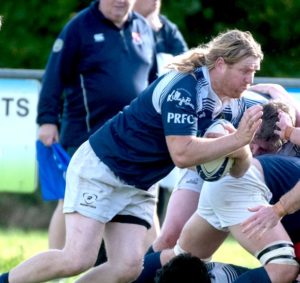 WHAT has been a pretty dismal Leinster League to date, took a turn for the worst on Sunday when Portlaoise travelled to take on Wexford Wanderers. When these two sides met in Togher in the opening round of the league Portlaoise emerged winners, but with just three points to spare.

Wexford, who up to Sunday had not won game, exacted revenge beating the visitors with 25 points to spare. And it was not that the hosts were particularly impressive, it was a case of Portlaoise inadequacies costing them dearly.

Portlaoise coughed up three tries in the opening quarter but went on to dominate many sectors, particularly in the second half. But a combination of poor decision making, conceding too many turnovers through poor rucking, slack defending and mediocre line-outs ensured the journey home was both long and fruitless.

Wexford opened their account when a late tackle in the 10th minute was penalised and they kicked to the corer, won the lineout and mauled over fr the try, which was converted.

Straight from the kick off Wexford used their possession to whip the ball across their back line and the outside centre outpace the cover to score under the posts. The conversion made it 0-14.

Ten minutes later a deep kick from Wexford was knocked on a and from the scrum the ball was again worked across the back and the centre strolled through the cover for a try.

Portlaoise messed up their first real chance of a score when they kicked to the corner from a penalty but knocked from the lineout.

They eventually got on the scoreboard with an excellent score. Jack Reddin fielded a Wexford kick and released full back Martin Phelan on the halfway line and he cut through the cover to score under the posts. Reddin added the conversion conversion and his penalty a few minutes later had Portlaoise very back in the game at half time, 21-10.

The visitors would go on to dominate the second half but for one reason or another could not add to their tally. Five minutes in a good attacking option went to waste when something was said the referee and he awarded a penalty to Wexford.

It was also decided during this period to throw several balls to the back of line-outs and most of these resulted in lost opportunities.

And to compound matters even worse Wexford managed to run in two late, late tries and win on a 35-10 scoreline.