‘They will come back chomping at the bit’ – Murphy 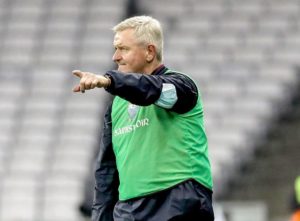 IT may not have the been the conclusion to the senior football campaign that Martin Murphy or the Portarlington players would have wanted, but the manager saw it as a start rather than a finish.

Murphy would be keen that his players take the positives out of what has been an exceptional year by any measure – two county titles and a Leinster semi-final. Moving up to provincial competition is a huge step and Murphy is of the opinion that the experience will stand to the players and should be build on.

Speaking to the media after Saturday’s game he said: “There’s nothing to say they can’t or won’t get back. There’s one or two lads in there, talking about stepping away but they’re in their mid 30s.

“You’d expect that after today but they have Christmas to recover and recoup and it’s been a very industrious 14 or 15 weeks since we played Ballyfin in the Laois senior semi-final of 2020.

“It has been great but it has taken its toll on our lads mentally and physically. Today is a sad day for us but hopefully rest over Christmas and these lads will come back refreshed in the new year.

“This is what players want and dream of playing in this stadium in the Leinster club, a fantastic competition. I’d say having got a taste of it this year, if these lads can get through Laois as they did in the last two years they will come back chomping at the bit to give Leinster a run again next year.”

Those of us who the Portarlington manager know that he is honest and will always speak his mind. His honesty came through on Saturday.

“Bitterly disappointed is an understatement,” he said of the result. “We were in a good place at half time. We had worked very, very hard in the first half and I thought we did an excellent job in the first half. We went in at half time four points up and in a comfortable position. I found we were relaxed but the legs started to run out on us in the second half.”

He did feel that a Covid outbreak in the team after the 2021 county final, when nine of the panel were positive, may have played a part in their performance, but he was quick to assure people he was not using that as an excuse for losing.

I don’t want to be making excuses, we were beaten by a better team in the end. I think a number of lads started to get cramp which would be highly unusual for our team and coincidentally there were all the guys who had Covid over the last three weeks, he said.

“After the 2021 final, we had nine players who had Covid. They were all out of isolation on the Tuesday we played Loman’s and it didn’t seem to effect them that much that day.

“But today four of the players who had cramp all suffered Covid in the past three weeks. We can only put it down to that but I’m not using it as an excuse. We were beaten by a better team.”

And again Murphy looked to the future in a very positive manner.

“We’ll bounce back from this. I think they’re a great bunch of lads. They’re in the dressing room distraught. They’ve got so used to winning over the last two years. It’s hard to take. Coming to Croke Park today was a big occasion and that makes that bit harder even. We died with our boots on. We’re happy in that regard but disappointed that we’re not going onto a Leinster final.

“I think over the year, and particular the last day against Loman’s they have shown that there is a fighting spirit in this team. Things can go wrong and they can bounce back from it. They showed great resilience today against a top class team and a team I think will give the club championship a fair rattle this year.”