Mick hangs up his ruler 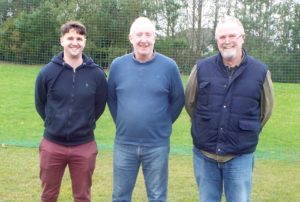 WHAT do Sergio Aguero, Jonny Bell and Mick Scully have in common?

Well first of all they are all well known sportspeople, Sergio probably the most famous if only for that 93rd minute goal nine years ago that broke the hearts of millions of Manchester United supporters and handed the Premiership crown to the blue side of the city.

The boy from Buenos Aires was chosen to play at international level a month after turning 15.

Jonny Bell made his Irish hockey debut the same year. He went on to win 181 caps, was chosen as captain on 29 occasions, went to the Olympics in 2016, then the World Cup two years later, and he participated in three European championships. Not bad going.

Where does that leave the boy from Roscrea now based near the cradle of the game in Kilcotton and in the heart of Borris/Kilcotton. Back in 1985 he captained the Premier County to All-Ireland under-21 glory alongside his Roscrea club mate Paul Delaney.

If Aguero denying Man Utd, was historic, the Roscrea man beating Kilkenny in an All-Ireland final was equally monumental. That was the pinnacle of his career that also included a few street leagues when Castle Street beat Rosemary in the final.

Okay, so what is the connection between all three sportsmen. The answer is that all three retired just prior to Christmas after distinguished careers.

Forty years ago, Mick Scully had just stepped out of minor having been rewarded with an All-Ireland medal after the Premier County beat Limerick in the Munster final and Galway in the All-Ireland.

Three years later Tipperary reached the under-21 final beating Clare by two points in the Munster final and disposing of Kilkenny by one in the All-Ireland. To any Tipperary man winning All-Ireland titles is bred in them from the playpen and beating your neighbours Clare and Kilkenny en-route to success makes winning even sweeter.

For Mick, 1985 was that bit extra special as he was captain and the Premier County were appearing in their third final in a row. They had lost the previous two. Kilkenny inflicted defeat in Centenary Year when Mick was part of that team, but that would be the only All-Ireland he would lose.

At senior level Mick played in a Munster semi-final beating Clare but Cork proved too powerful in the final.

After that he concentrated on club hurling but Roscrea must go back to 1980 since Dan Breen spent time by the Monastery.

Mick has been teaching in Portlaoise for many years, first in the CBS on Tower Hill and more recently on the Borris Road.

He has been involved in coaching at various levels and back in 2009 he guided Ballinakill to a senior semi-final, beating Camross in what was a major upset. Camross had beaten them a year earlier by eight points and a year prior the Harps had also knocked them out.

The introduction of the Roscrea man had changed their losing ways. They stunned Camross, winning by seven points, and now in their first semi-final in five years their opposition was none other than Clough/Ballacolla where the Roscrea man had spent time.

Clough/Ballacolla were knocking on the door for the fifth year in a row but had failed to make the last two. But in 2009 they had brought in more Premier blood, with a national league medal and an All-Ireland under-21 medal, a few championships with Cashel King Cormac’s and a Munster club. The battle between the two Tipperary men yielded a high scoring thriller with Clough/Ballacolla reaching a first senior final since 1963.

To say the rest is history would be an understatement. As the Roscrea man hangs up his ruler, ironically Clough/Ballacolla are marching on Croke Park and Mick wishes them well.

For the past number of years Mick’s son, PJ has carried on the game his father adored but like his dad has hardly reaped the rewards his talent deserves, except for a lone senior medal five years ago. But he does have several under age medals.

Mick was involved with several underage teams in the county but whether he returns only time will tell.

As he calls time after 36 years service to teaching, Mick revealed a well kept secret. He recalls how he was summoned to Tower Hill in Portlaoise back in 1985. Hurling was all the talk in Laois that summer after the county had shocked Wexford in the provincial semi-final and Offaly had beaten Kilkenny after a replay.

Tower Hill had advertised for a woodwork teacher and it was always regarded as hurling centre with the Christian Brothers responsible for preparation and Br Howard is credited with bringing success to both the school and Portlaoise GAA.

Mick had spent several years in Thomond College mixing with future inter-county stars and was a prominent member of the Roscrea senior hurling panel. As it transpired the North Tipperary championship was scheduled for late in May in ’85 but that week a letter arrived telling Mick he was to report to Tower Hill for an interview on the following Tuesday at 10am sharp.

Like all good mothers Mrs. Scully advised her son that it might be better not to play that weekend especially as it was against fierce rivals, Toomevara. He get hurt but his father pointed out it was an important game and Mick agreed.

All was going well until ten minutes from time when a fracas broke out near the Toomevara goalmouth. Mick was headed for the 21 yard line when he got a dig as he struck for a goal. Incensed he retaliated and a young up and coming referee called the two assailants and, in the days of no yellow cards, the referee ordered both to the line.

The ***Cork Examiner*** match report on Monday of course highlighted the fact that the Roscrea man was the captain of the Tipperary under-21 team. As always bad news travels fast. When he arrived home the mother said she was right, he should not have hurled and if they heard about it in Portlaoise it would not held his job prospects. His father said nothing.

On Tuesday morning Mick thumbed a lift to Portlaoise and got directions to Tower Hill where saw several other hopefuls. He sat quietly and did not engage with any of the other hopefuls. Then a young Christiaan Brother appeared with a list in his hands and called out the name of Scully, Michael Roscrea and he directed Mick to the boardroom. At the top table were three people including one Christian Brother who looked very stern but said very little.

Mick thought the interview was going well when another Brother came through the door and joined the other three. Mick thought he recognised him from matches and he was right. Then in his best Cork accent this Brother said: “Can I ask you if you were ever sent off in a hurling game?”

Mick thought this was out of place and answered “not to my knowledge”. Then the Cork man produced the sport section of Monday’s ***Examiner*** and there it was in black and white – Tipperary captain gets his marching orders. Scully was shaken but replied, “oh the referee admitted afterwards he got it wrong and the decision was overruled”.

The Cork man said no more and figured the County Board did not want to be without the captain for the Munster final against Clare.

When he arrived home his mother was still clutching the rosary beads in her hands and asked Mick how he had got on. Mick replied “good mam”. Did they mention the report in the paper, she wanted to know. Mick replied in the negative but said they did talk of hurling and she returned to the praying.

A week later a registered letter and the postman delivered the verdict and Mick read it out to the mother.

“Michael Scully the management of Portlaoise CBS are pleased to advise you that your application for the position of Woodwork Teacher at the above address has been successful and you should report on the last Monday of June and we wish you every success.”

Mick never looked back and when Mick Minogue, the Roscrea hurling guru, heard of his appointment he said to Mick that they knew he was good at ‘swinging timber’

Mick got the job and a Munster and All-Ireland medal all in the same year and dare I mention a red card, but then agin there were no red cards.