Miho travelled via Tokyo, New York and London to play golf in Abbeyleix 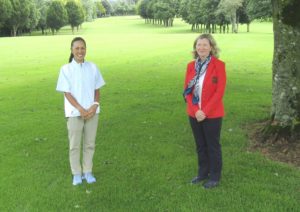 RALPH McTell wrote and sang what became one of the most popular ballads relating to Ireland – I speak of (It’s a Long, Long Way) From Clare to Here.

Miho Reilly might be forgiven for paraphrasing McTell’s lyrics and changing them to “It’s a long, long way from Osaka to Abbeyleix”. And when that trip takes you via Tokyo (twice), New York and London, it certainly was a long, long way.

Mind you, the fact that Miho met and married a good Abbeyleix man, Greg Reilly might have had something to do with her ending up in the centre of Ireland, but for a time that looked it might only be a temporary arrangement.

That is until golf intervened.

Not only did joining Abbeyleix Golf Club provide Miho with a social outlet and help her get over her loneliness but also led to her making some great friends.

And all the while her golfing prowess was improving and climaxed in June this year when Miho who had only been playing golf in earnest for a little over two years won the Captain’s Prize in Abbeyleix.

And if you think that was impressive. Less that 24 hours after being presented with the Captain’s Prize Miho was back on the course and hitting the headlines once again. Out for a leisurely round with her friend Rosann Tiernan, Mihpo stood up on the 17th tee, at 142 yards the longest Par 3 in Abbeyleix. And yes, you’ve guessed it, Miho shot a hole-in-one.

And for good measure Miho also won a Medal competition in 2021.

Miho met Greg Reilly in Tokyo where they worked close to each other. They then moved to New York together, got transferred to London and then transferred back to Tokyo.

“We were married before we came here (Abbeyleix). Greg lived in Tokyo longer than I did, maybe 14/16 years. He speaks better Japanese than I do,” joked Miho.

“We came (Abbeyleix) because Greg missed Ireland so much. He missed all the green and the open space and I think he missed his golf as well,” said Miho of her husband who is an enthusiastic and skilful golfer.

Miho explained how she started to play golf through the company she worked with in New York.

“I did not know how to even hold the club but we had to play 18 holes with executives and everything. So I thought it was fun but when I played with Greg I didn’t have a good time at all. He was so serious and competitive. He didn’t want to talk to me so I thought this wasn’t the game for me and I didn’t pursue it,” says Miho who has been living in Abbeyleix for three years now. When she arrived first golf was not even on the horizon.

“When I came here I nearly went back home because I was miserable. I didn’t know anyone. I was already 54 years old when I got here and I felt like it was too old to make any new friends and I really seriously thought about going back home.

“I basically only knew Greg’s family and every day I would visit Greg’s parents because they were the only people I had to talk to. I had no opportunity to meet anyone else. I was so lonely.

“But then Karen (Odlum) started the Ladies Into-Golf (programme) and some of my neighbours said ‘why don’t you give it a try and make some friends’. So I did and it really changed my life, it really did. If the Into-Golf was not here I would be long gone, we would not be having this chat now.

“The more I played the more people I got to meet and the more friends I made. So now you could say I am addicted to golf. Even when no one is around I come out to play.”

Playing is a lot different to when Miho used to play with Greg in New York.

“When I am out with my friends now it all about the chit chat and even when somebody is trying to hit the ball we are still making some jokes. That’s how we play.”

She has now been playing in Abbeyleix for there years and says lessons she received from Donal Murphy in her first year had a lot to do with her sticking with the game.

So fast forward to July 2021 and the Captain’s prize.

“I won the Captain’s Prize and then after that and the following day I had a hole-in-one when out with Rosann Tiernan, and she was more excited than I was. I hit the ball but I didn’t see where it went and she was the one who saw it,” says Miho

But Rosann must have had something of premonition as it emerged that she had captured the shot on video for prosperity.

Miho says she was lucky to be playing with Helena Burke, a 4 handicapper, who she considers is the best golfer in Abbeyleix, and few would disagree with her.

“She is such a great player and great to play with. She will tell you that basically golf is playing against the course not anyone else. She makes you so relaxed when playing with her.

“Because if I start thinking I can’t do it, you see I start topping the ball if I think too much. But because I’m playing with such a great player, and if I’m thinking I’m not good enough to win anything, I just go out to enjoy my golf and that made my day. I was not worrying about anything, I was just relaxed and enjoying myself.

“But still from the first hole to the last, my heart was beating so fast. Helena had broken the course record on the Thursday so all I was thinking was I didn’t want to lose her her momentum. Greg always tells me it’s better to take my time and take one shot rather than rushing around and taking three or four shots. So I was just thinking of hitting a shot that was decent enough for her (Helena) and not hold her back.”

Miho added that there are some people who will have enough confidence and will not want to play with Helena because she is so good.

“But she is so modest about how good she is and will always help others,” says Miho.

Miho concedes it is highly unlikely she will ever be a 4 handicapper, but she will always remember how, not only Helena, but many other ladies in Abbeyleix helped her along the way and she now does the same with those new to the club and to golf.

“I say if I can do it, anyone can do it and that is what I would like to pass on.”

So now she goes out with those ladies who are getting into golf and marks cards for them and makes them feel welcome.

“Everybody helped me and made me feel so welcome, so now I want to do the same. I would recommend it to any woman to go out and start to play golf. You will meet so many lovely people and make lots of friends. I want to encourage young people because it is good mentally and physically for them.”

Miho wraps up our chat by telling me: Abbeyleix is such a wonderful club. The people are so welcoming and I was made to feel like I was here all of my life.