Portlaoise made to work hard for an away win at Kilkenny 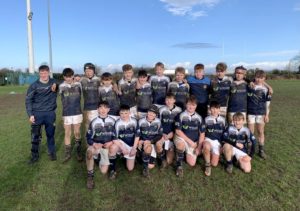 PORTLAOISE U/14s carried their strong league form into the new year with a hard-fought win away to Kilkenny on Saturday in tough under-foot conditions.

The early exchanges were even as both sides got to grips with each other and the pitch. Second-row Shane Foley and open-side Donncha Carroll carried strongly as Portlaoise got a foothold in the opposition half. The back line started to get into their rhythm with outside centre Daniel Whelan and left wing Fionn Cuddy breaking the gain line. Out-half Matt Cunningham was involved in all that was good about Portlaoise’s attack and, midway through the half, he took a quick pass from scrum-half Paul Byrne to beat the defence on the the outside and score the game’s first try.

Kilkenny responded quickly. They won a penalty after some good work off the back of a scrum and, moving the ball quickly through the hands, they went over for a try to level the game 5-5.

Before they knew it, Portlaoise were 12-5 behind. A back-line move was well read and an intercept pass saw the Kilkenny right wing run from half way to score under the posts.

This stung Portlaoise into action. The front row of Fionn Mullen, Conor Deegan, and Joey McGuinness were in the thick of the action and second-row Cormac Drea was getting through great work at the rucks. After a great run by Cunningham, Byrne fed captain Eanna Moynihan who broke through the defence to score under the posts. Cunningham added the points to leave it all square at half-time.

Whatever was said during the break seemed to work as Portlaoise upped the intensity at the start of the second half. They were on the attack straight away and a great move by the back line out to the left saw Cuddy score his team’s third try to make it 17-12.

Portlaoise continued to set the pace and great running by Carroll and right wing Cillian Dunne had them on the attack again. Kilkenny conceded a penalty as the pressure told and Zack McGuinness took a pass from Byrne at pace to beat the defence to score another try. Cunningham added the points to make it 24-12 to Portlaoise midway through the second half.

Kilkenny responded strongly and, after a period of constant pressure, they broke through for a try to leave it 24-17. They continued to press hard and Portlaoise were forced to defend strongly for the remainder of the game. Dave Alley, Dara Coffey, and Bill Rigney worked hard when introduced while, late on, inside centre Aaron Fitzpatrick and full back Eoghan Kennedy combined in defence to force a relieving penalty when Kilkenny looked set to score. Cunningham cleared to touch and Portlaoise held on for the win.

Back to the training ground this week ahead of a visit to Edenderry next Saturday.