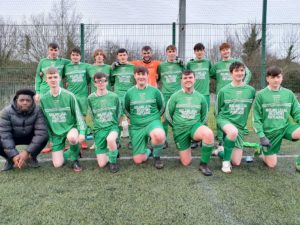 SUNCROFT travelled to the astro pitch at Portlaoise Leisure Centre on Saturday for their U/19 CCFL league game. Portlaoise beat Suncroft in a close game away in October and expected a tough test here.

Suncroft won the toss and decided to play with the strong breeze at their backs. Despite this the home team started well and looked comfortable in possession from the offset. The Suncroft keeper was called into action very early from a Jason Horan shot and then he was fortunate when James Wheeler saw his lob drop narrowly wide.

Callum McHugh in the Portlaoise goal then did well to clear from the edge of his box from a wayward back pass as the Suncroft striker closed him down.

On 10 minutes Sean Kitchen scored the opening goal of the day. Michael Culliton and Tiernan Cahill were involved in the build-up and Sean controlled the ball and hit it immediately from the edge of the box giving the keeper no chance. Portlaoise went on to dominate the half but the final pass and shot was letting them down.

With 35 minutes on the clock they were made to pay. Kyle Enright was harshly judged to have fouled the Suncroft striker on the edge of the box after a great tackle. The Suncroft player gave Callum McHugh no chance from the resulting free kick and the game was level.

Credit to Portlaoise who upped their game straight from the kick off and three minutes later they went ahead again. Michael Culliton, playing in midfield, and Tiernan Cahill linked again. The final pass put Jason Horan clear through the middle and he calmly slipped the ball to the net giving the keeper no chance.

Suncroft responded positively and put their best spell of the game together to finish the half very strongly. They had another free kick from 25 metres which saw McHugh make a great save turning the ball over the bar. Three corners followed and the home team were under pressure and were relieved to get to the break leading 2-1.

The home side started the second half strongly and deservedly scored eight minutes in. Michael Culliton went along the end line and pulled a ball back into the box for Tiernan Cahill to finish with a powerful shot.

The two goal cushion was well deserved and Portlaoise were in control. Kerins and Enright were assured at centre back again. Their partnership continues to improve every game they play together. David Mulhall was solid at right back and seemed to win every tackle on that wing. Conall Rowney, at left back was assured on the ball and willing to get forward and link play.

Brian Brennan, anchoring the centre of midfield, was dominant in the tackle and willing to carry the ball forward. Sean Kitchen again impressed in the 10 position. His combination play with Cahill and the wingers is becoming a feature of the attack.

The game was put to bed 15 minutes into the half. James Wheeler ran three-quarters the length of the field on the right wing beating the winger and full back with ease. His ball across the box was finished to the net first time by Horan.

Moments later Wheeler pounced on a blocked clearance and finished to the top corner. Two goals in a matter of minutes and the scoreline now reflected the home team’s domination.

Peter Naughton, Adam Kingston and Tony Brennan entered the game. All three fitted in seamlessly and the home team continued to dominate for the final 20 minutes. Tiernan Cahill set up Wheeler for his second of the day and Cahill grabbed his second and the team’s seventh with eight minutes left after a great cross from the right from Tony Brennan.

Portlaoise will be delighted to get the second half of the season started on a winning note. There will be some tough games to come but the team are delighted to be back playing and look forward to the challenges ahead.