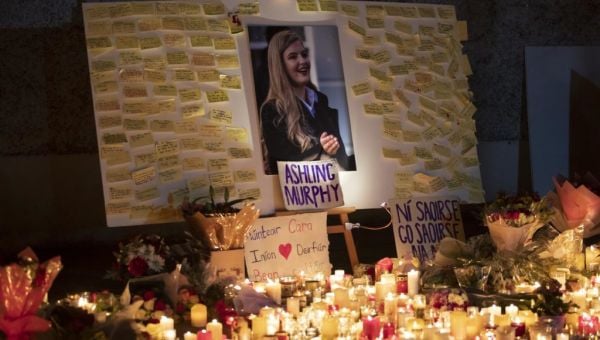 A new suspect identified by gardaí investigating the murder of Ashling Murphy in Co Offaly is due to be interviewed by detectives when he is deemed well enough by the medical staff who were treating him for a number of injuries on Friday night.

The man went to a Dublin hospital for treatment late on Thursday. When gardaí learned of his presence there, as well as the nature of his injuries and the fact they were unexplained, they carried out checks into his background. He was being monitored by gardaí on Friday night.

As The Irish Times reports, it was not not clear when he would be physically and mentally assessed for interview but gardaí were hopeful that would happen imminently.

The Irish Times understands the new suspect has lived in south Dublin and in the midlands, where he has family members.

Gardaí believe Ms Murphy (23), a national school teacher and talented musician from the townland of Blueball just outside Tullamore, tried to fight off her attacker, resulting in the murderer leaving forensic evidence at the scene.

Garda Headquarters in Phoenix Park, Dublin, on Friday night said it was “not confirming any specific details” about the progress of the investigation.

A statement added that the Murphy family was requesting “privacy, space and time to process” what had happened.

Meanwhile, President Michael D Higgins and his wife, Sabina, on Friday morning spoke to Ms Murphy’s mother and father, Kathleen and Ray, and her siblings Amy and Cathal. President Higgins said he had conveyed his “profound sympathy and sorrow and sense of loss that her tragic death has meant to so many”.

“People throughout Ireland, in every generation, have been expressing their shock, grief, anger and upset at the horrific murder of Ashling Murphy,” he said. President Higgins also urged people in Ireland to reflect on our “actions and attitudes” and “what needs to be done to eliminate violence against women in all its aspects from our society”

As vigils for Ms Murphy were being held across the country on Friday afternoon, the murder scene at Boland’s Lock, Cappincur, on Grand Canal Way about 3km east of Tullamore remained sealed off. Ms Murphy died from her injuries there after the attack at 4pm on Wednesday.

Garda sources said the quality of the forensic evidence, including DNA, gathered during the first 24-48 hours of the investigation represented a significant “breakthrough” in the case.

The forensics were used to exonerate a man arrested on Wednesday in Tullamore and he was released without charge late on Thursday night.

Meanwhile, the former suspect in the Ashling Murphy murder investigation extended his sympathy to the grieving family and has spoken of the trauma of his detention and the resulting public commentary.

In an interview with the Offaly Express, Radu Floricel (39) said the two days in custody were the most terrifying of his life.

When he was released on Thursday night, the gardaí issued a statement saying he was no longer a suspect and had been eliminated from their enquiries.

He said he had been identified on “media and social media” and “really bad” and “degrading” things had been said about him.

“We are a proud Romanian family. We don’t think that should be seen as degrading or anything like that,” he said.

“My mother is a voice trainer for singing and speech therapy. She has had students from all different families in town. A lot of families and people know us.” His parents lived in Dublin at first and ran a restaurant there and they then established a coffee shop in a Tullamore shopping centre.

He said he does have a number of previous convictions for public order offences and believes an existing assault charge arising from an incident last year at his home will be dropped.