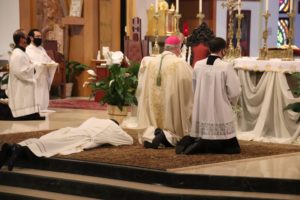 In the past three years in Ireland, 20% of clergy have died.

The average age of diocesan priests in this country is now close to 70. In any other public service, the vast majority of our clergy should be retired and enjoying rest and clam after decades of faithful service. Instead, many are expected to keep the ship afloat well into their 80s.

The question is: how do we respond to this? Is it a question of how we keep the show on the road (or as one priest wrote in a local newspaper, ‘rearrange the deckchairs on the ***Titanic***’) or do we attempt to see this through the eyes of Christ and his Father?

When Christ was physically present among us, the challenge that was (and still is!) made to all of us was to continue to grow and develop – not just maintain an existing system – which the existing system of his time found so hard to countenance.

Fewer priests does not mean no priests; rather, it could mean moving to a different understanding of the priesthood – one that emphasises empowerment and enablement and getting local eucharistic communities to take responsibility for managing themselves – in which case we may not need so many priests. And there’s no reason why we cannot have married priests. Let’s face it, we’ve had them before – but not to simply prop up the existing system as part of the next phase of development, which our Saviour wills.

It means quite a few changes, both theologically as well as pastorally. And while it is understandable that some priests (and even more bishops) will find difficulty here, now is the time to start thinking, planning and preparing. We have plenty of examples from earlier periods in the Church to draw on. But this does not mean turning the clock back; rather, we can take the learning and apply it to the present and the future. As my late mother used to say: ‘God gave us brains – and he expects us to use them!’

In my opinion, this continued disconnect from lived reality is at the heart of the so-called ‘vocations crisis’. Reality is where the truth lives – and a male, celibate, hierarchical priesthood no longer rings true. In the words of singer-songwriter Paul Brady, it is ‘trying to reach the future through the past!’

Yes, we need ‘priests’, but we also need a reimagined priesthood, freed from the shackles of history. A priesthood where people who are trained in spirituality and an understanding of the Gospel message, who are willing to work in their community as facilitators at community gatherings to celebrate the Eucharist, a celebration of the universal presence of a loving God … to forgive, to heal, to mourn.
These people would be drawn from their own community of faith, not separate from or above it. Celibacy and gender exclusivity are weapons of power and authority.

As a Church, we need to step into the deep to ask the pertinent questions and to have the ears to listen to the prophetic voices of our time. We are weighed down by so much historical baggage. We need a new freedom.
The synodial pathway will be a long and winding road indeed …

TIme to think: The giver is bigger than the receiver