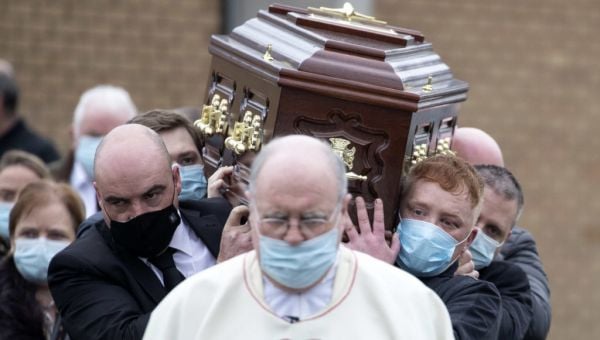 The funeral of Peadar Doyle, whose body was used in an apparent attempt to claim his pension at a Carlow town post office, has taken place today.

Mr Doyle, who died on Friday, was laid to rest at St Mary’s Cemetery after a funeral Mass this morning at the Church of the Holy Family, Askea, in Carlow town.

The 66-year-old’s funeral was attended by a small gathering of family and friends.

“The family are very upset over comments circulating online over the weekend. It’s a very sad case for the people of Pollerton (in Carlow), for the Doyle family, for his four sisters who are heartbroken, and his other family members.

“They are very upset over the whole affair. I knew Peadar personally. I looked after his mother, his sister, his brother Lar who predeceased him and whom he lived with. I knew him when he was caretaker at Presentation College.

“I know Peader a long time. The family only live a few yards down the road from the funeral home here. It’s very, very sad.”

Mr Doyle’s death notice states he died “suddenly” and that he was “predeceased by his parents Patrick and Anne, sister Angeline and brother Lar”.

Gardaí are now appealing for anyone who may have seen Mr Doyle in the days prior to his death to come forward.

Garda Superintendent Aidan Brennan, who is leading the investigation, gave his sympathies to the Doyle family.

“We know that he collected his pension himself the previous Friday but we are anxious to speak with anyone who spoke to him in the days in between then and last Friday to establish when he was out of the house last and when he was out and about.”

Supt Brennan said that the gardaí have received a “huge amount of assistance already from the (public). It was a hugely traumatic incident for the staff in the post office.”

He confirmed that gardaí have spoken with the two men who brought Mr Doyle to the post office and that they received “good co-operation” from them.

The recent events in Carlow made local, national and international news after Mr Doyle’s body was presented at Hosey’s Post Office on Staplestown Road last Friday at about 11am by two men seeking payment of his weekly pension.

Paramedics and gardaí were called when it became clear Mr Doyle was dead, though his fully clothed remains were being propped up by the two men. The men departed the scene, leaving the remains of Mr Doyle behind, and were not paid his pension.

Gardaí investigating the incident believe Mr Doyle was already dead when he was taken into the post office. A postmortem has determined there was no foul play but was only able to estimate the time of death as some time on Friday morning.

The two men propping up Mr Doyle’s remains in Hosey’s post office on Staplestown Road were both known to him.

One of them went voluntarily to Carlow Garda station to give a statement, in which he insisted that Mr Doyle was alive when they left his home on Pollerton Road and had taken a drink of water just before leaving.