Laois councillors stand their ground in opposition to windfarm distances 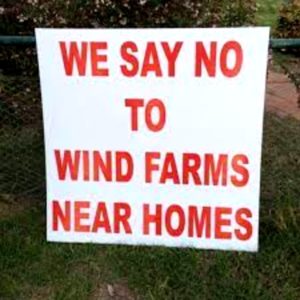 Councillors once again rejected council management’s recommendation for wind farms in Laois to be located 500 metres from homes.

During the discussions on the draft County Development Plan (CDP) 2021-2027 councillors defied the recommendation of the county’s Chief Executive John Mullholland to allow wind turbines to be erected 500 metres from homes.

Mr Mulholland said that the submission from councillors to have wind turbines setback 1.5 kilometres had been rejected by the Office of the Planning Regulator (OPR) who oversees CDPs and ensures that they are in line with regional and national interim guidelines on renewable energy. He said that the OPR had rejected their submission and was recommending the 500 metres set back distance should be included in the county’s new development plan.

“I propose the 1.5km set back distance remains. I propose that it should not be removed from our previous CDP. Everyone is in favour of renewable energy but not when it effects people’s homes” said cllr Pádriag Fleming.

The council’s Director of Services Angela McEvoy said that the same proposal by councillors in 2017 had been overturned by Ministerial Directive and that the national set back guidelines for wind turbines is 500 metres.

Cllr Fleming’s proposal to reject the chief executive’s recommendation and adopt the 1.5km setback distance was unanimously approved by all councillors present at the meeting on Tuesday 25 January.