In this week’s Laois Nationalist, Niall “Slippers” Madden describes two time Grand National winner, Tiger Roll, as the People’s Horse. The champion is also going for his sixth win at Cheltenham on Wednesday and all indications are that this will be his last race. 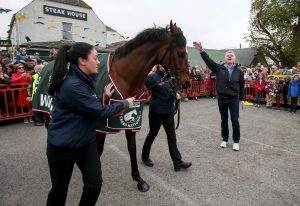 Hail The King! Owner Michael O’Leary salutes the great Tiger Roll. Will Wednesday at Cheltenham be his last day out? Photo: ©INPHO/Oisin Keniry

There is also a fascinating contest on Day 2 between Shiskin and Energumene while Facile Vega, the son of the great Clane horse, Quevega, is a leading contender for the Bumper, possibly bringing more glory to the north Kildare town after jockey Mark Walsh’s win on board Curragh based trainer Padraig Roche’s Brazil on Tuesday.

Here are “Slippers” predictions for the big races on Day 2 of Cheltenham Festival 2022 from this week’s Kildare Nationalist, in your shops now.

Gordon’s horse, Ginto, has a big chance, unbeaten over hurdles. The trip is definitely going to suit him. They seemed to have spurned the 3m Albert Bartlett to run here. Journey With Me for Henry is another one with a chance. The Irish have the first five in the betting so I think it’s going to be another win for us. We have a good hand in all the hurdlers and I think we are a long way ahead of the English. Last year I said that of the Novice Chasers.

I’m going to go with Willie Mullins to win this one with Sir Gerhard with Ginto and Journey With Me not too far behind.

With both Willie Mullins’ horse, Galopin Des Champs and Henry de Bromhead’s Bob Olinger  opting for the Novices’ Chase on Thursday Bravemansgame for Paul Nicholls seems to be the one to beat here.

Bravemansgame had to get stuck in to win the last time out . Nicholls’ horses have been under a little bit of a cloud but he had a winner in Sandown on Saturday so maybe they are all coming back at the right time.

Venetia Williams’ horse, L’Homme Presse, has been very impressive on the last two occasions that I have seen him. He has won around Cheltenham as well and if he goes here he’s going to take a good bit of beating.

I had a sneaking suspicion that Paul Townend might ride Chacun Pour Soi for Willie here but he has opted for Energumene. I know Willie absolutely loves Chacun Pour Soi and I know too he wants him to win a big one. He’s run in England twice and I think he has underachieved a little bit. He just hasn’t shown in England what he has shown over here.

If I was Paul Townend, though, I too would ride Energumene and I’d take my chance that I’d beat Shishkin this time but then again if I was asked which horse I’d like to ride here though I’d opt for Shishkin any day of the week.

He’s a horse of a lifetime and I think he’s going for his sixth win at Cheltenham. He’s won a Triumph Hurdle, an Amateur Chase over four miles and he’s a two time Aintree Grand National winner. I hope he wins and if they do call it a day then I hope that do it there and then so that he gets the recognition he deserves on the day.

Davy Russell has said that he would like to ride him and I’m delighted that his handlers have agreed to put him up he won the two Nationals on him. As I say I hope Tiger Roll wins. He’s a “People’s Horse”.

It’s very hard to get away from Willie Mullins’ Facile Vega and Patrick Mullins is obviously going to ride him but how many times down through the years have we seen Willie’s hot shot get beaten in the Bumper by another of his horses. We saw it last year with Sir Gerhard beating Appreciate It and I think Ruby won it a few years ago on a 25/1 shot.

Redemption Day is a very good horse of Willie’s and they’re all raving about American Mike for Gordon Elliott. I was lucky enough to win the Pat Taaffe Handicap Chase in Punchestown on his mother, American Jenny. It would be nice to see him win because I obviously followed him  as I know the dam. Madmansgame was very impressive when he won in Navan for Willie.

Facile Vega is 5/4 and I think he’ll win but he’s too short for me so I’m going to take a chance and say Redemption Day. Maybe Paul will ride that one. It will be interesting to see which jockeys ride which horses. Usually Patrick has first choice with the Bumpers and I assume he’ll ride Facile Vega.