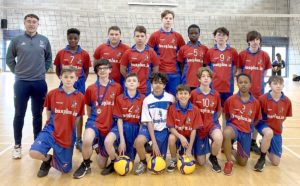 First off, the Senior Boys won the all-Ireland final in Division B. This was followed by the Cadette Boys who finished in runner-up position in the Division A final. To cap off the successful run of the basketball teams the Junior Boys were crowned all-Ireland champions after winning their Division A final at UL Sports Arena.

Their most recent success was achieved by Junior boys’ team as they played against Sutton Park in an all-Ireland Division A final. Throughout the year they worked hard for this event and their dedication paid off as the team came out on top against Sutton Park 2:0 in sets with a few points lead in each.

The captain and most valuable player (MVP) Akachi Ogbulafor demonstrated that volleyball is his sport and passion and that he can hit the ball superbly both from serves and attacks as he scored point after point for his team to secure the title. The setters Aaron Bowden Adair and Ksawery Polak made sure to set fantastic opportunities for attacks for their team but also did great at blocking and receiving the ball when needed.

If it was not for Mohab Abdelrazak these attacks would never happen as he ensured to receive the ball straight to the setters almost every time. Sam Kwiatkowski and Kyle Thompson made sure that their excellent serves precisely hit the court every time and the blockers Jeremiah Phillips and Christopher Daly jumped up to try and block our opponents as much as was possible with Enzo Tetzner and Niall Barry by their side.

The college also acknowledged the other team members that played and provided support for the team throughout the year who included Aironas Kocarevskij, Sanders Kristinojs, Shiloh Banwell-Bermeo, Azim Shitta, Gustas Rakauskas and Kuba Bronowski.