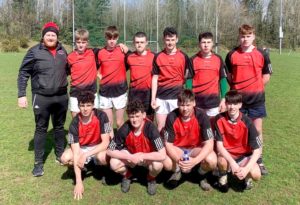 ON Wednesday last St Mary’s CBS, Portlaoise TY 7s rugby team travelled to TUS Athlone for a 7s competition being run by the college. This was the school’s first time participating in a 7s rugby tournament so it was a learning curve for all.

There were six teams in the competition and St Mary’s CBS came away unbeaten with the cup.

Their first game was played against a strong Moate side, but it didn’t take long for the fast paced Portlaoise lads to get the ball moving through the hands. It was an interception by Jake Darcy that put CBS on the score sheet. They continued to play well in this game with Jake Andrews powering over eventually running out 15-0 winners.

The second game was against Glenamaddy CC and the Portlaoise lads got going early with a great move setting PJ Larkin up for the try. A few more clever moves kept CBS opening up the Glenamaddy defence to score a few more tries, one of these coming from a wonderful cross-field kick by Jake Darcy to send Larkin in again. A second win for Portlaoise.

The third game was going to be their toughest and it was to be played against the other unbeaten team, Roscommon CC. Again the CBS boys started well with a well worked try sending Dylan Roche Duff over the white wash. This game was much more physical than the previous two and Adam Glynn really impressed in defence putting in huge tackles and hits along side his partner in crime and captain on the day, Nathan Duffy.

CBS then moved on to play Gort Community School who were weakened due to numerous injuries. For this game CBS had a couple of debutants in Jamie O’Connor and Luke Kenny Oman, both who impressed.

They had now topped the group as an unbeaten team heading into the final where their opponents would be Roscommon CC, who they had already played in a tough and gritty group game.

The CBS boys were now getting fairly tired after four tough group games. Having said this, they didn’t show any tiredness and opened the scoring in the first minute with a great move sending PJ Larkin in for a try. Paddy Reddin and Nathan Duffy were both putting in huge tackles and hits to keep the ball in Portlaoise possession. Reddin then made a huge break, skipping through the centre leaving RCC players in his wake. This break put CBS in a good position for another great move to get Larkin in again.

In the second half Darcy made great breaks to set up Reddin to run in a great try in the corner. After this CBS found ourselves perched on our try line defending a RCC attack. It took a massive hit and tackle from Nathan Duffy that resulted in a turn over after which a quick break from their backs found them closing in on the RCC try line. In the end a massive carry from Adam Glynn saw him power over for the try.

It was a victorious day out for the CBS as the cup was brought home to the Borris Road.