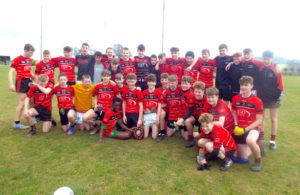 The victorious Portlaoise CBS team after the South East final

LAST Friday Cross and Passion from Kilcullen arrived on The Heath expecting to add to the laurels in Kildare. they had some excellent footballers and Portlaoise CBS have long been out of the honours list. But the home side fielded a strong team but the weather was a real spoil sport. However, that did not deter both from giving their best.

The visitors opened the scoring when Conor Duggan won possession from the throw in and kicked a point. Portlaoise responded as Oran Darcy equalised and against the gales Portlaoise scored the game’s first goal. Josh Finn did the spadework and fed Darren Brennan who found the net after four minutes.

Portlaoise then added three good points, Brennan adding the third but Kildare were soon back in contention. Fergal Naughton denied Kilcullen with a diving save at the expense of a 45 which dropped in the square and Duggan pounced.

Kilcullen were raiding down the wings and soon went in front. Another Kilcullen move saw Conor Duggan go past two defenders, feed Finn and he blasted low beyond the Portlaoise net minder and the teams were level again.

After points were exchanged the half time whistle sounded and the score board read Kilcullen 2-3 Portlaoise 1-6.

Portlaoise now had wind assistance but Kilcullen kicked an early brace of points and worst was to follow for Portlaoise. Roche lobbed another high ball into the breeze but it rebounded off the upright and Adam Barry caught the rebound and struck for his side’s third goal. The margin was five now and only five second half minutes played.

Portlaoise composed themselves and Ryan Doran kicked a point followed soon after by a well taken goal by Darren Brennan. Portlaoise now enjoyed a purple patch. Oran Darcy kicked a brace, then Darren Brennan added his fifth and Portlaoise were ahead going into the final ten minutes.

Kilcullen went in search of an equaliser but as danger man Roche was poised to add a fourth goal a brilliant block by Cormack Deegan denied him.

As it appeared the game was destined for extra time up stepped Josh Finn who slipped his marker and with his trusty right boot squeezed the ball between the uprights.

Kilcullen went all out to save the day but time ran out and Portlaoise CBS had claimed a dramatic victory. When Tom Jones presented the trophy to David Brown, he complimented the two teams on a great and very sporting contest.