Knockbeg pay the penalty for first half slip ups 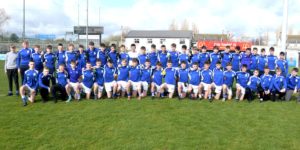 AFTER a great start where they went into a 1-2 to 0-0 lead, Knockbeg College were left to rue what was potentially a fatal concession of two goals in a matter of minutes coming up to half-time. Throw in a missed penalty in the first quarter and the Carlow college side will feel this was one which got away.

The opening three-pointer came on nine minutes when Eanna Byrne ran at the Good Counsel defence to drive the ball to the net. With Blake Rice and Eoin Ryan getting among the point scorers Knockbeg just needed to avoid conceding a goal as they played against a stiff breeze.

Then disaster, from a Knockbeg point of view, when Dara Sinnott was given too much space and he slipped the ball home from close range. Just on the break Mikey Kent took possession and again the Knockbeg net rattled. From being in the ascendancy they now trailed 2-2 to 1-3 at the break.

It was still theirs for the taking but they came up against a Good Counsel side who fought for every ball as if their lives depended on it. Time and time again Knockbeg players found themselves running into brick walls. It was death by a thousand cuts as Good Counsel made good use of their chances. Darren Rossiter tacked on three points in succession and Kent pulled his shot wide and left when it looked easier to score.

Byrne with two points and Dylan Dwyer with another was not enough and for the final twenty minutes of the game Knockbeg didn’t score. Good Counsel grew in confidence and at the end James Reburn added an insurance point which closed the door on a possible Knockbeg College equalising goal.