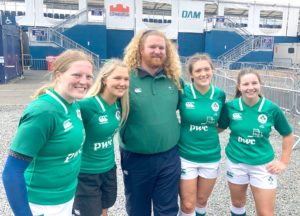 THE inaugural Under-18 Women’s Six Nations Festival kicked off in Edinburgh on Saturday last heralding the dawn of a new era as Ireland took on England. Ireland played games against England and France concluding with a game against Wales today.

Among those on the Irish team were Koren Dunne, Sarah Delaney (Vice Captain), Alanna Fitzpatrick and Hannah Wilson who received their Ireland U/18 caps in Edinburgh following the final game of the week.

Sarah, Alanna and Hannah play with the Portdara U/18s while Koren plays with Portlaoise. Rugby has been a major part of the sporting life for all four players.

Sarah and Hannah started out as minis with Cill Dara RFC, while Alanna was introduced to rugby at Portarlington RFC. Having completed their initiation stages, the girls came together as part of the Portdara U/16s. All three were part of the successful Portdara U/18s who won the Leinster Cup earlier in the season. Earlier this year Alanna was named as one of the 13 players included as a member of the Women’s National Talent Squad

Koren had a similar development path, starting with the boys as an U/8 in Portlaoise before progressing to their girls underage teams. Koren was a member of the Portlaoise side that won the Leinster U/16 Plate in 2018/19 and continues to play with Portlaoise U/18s.

All four players were members of the Leinster U/18 girls side who went undefeated in the interprovincial series and are currently members of the North Midlands side who meet the South East in the final game in the Sarah Robinson in Energia Park on Thursday next 21 April. 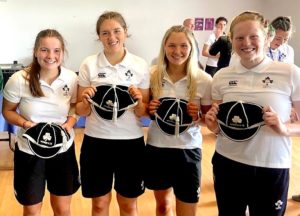 Hannah Wilson, Alanna Fitzpatrick, Koren Dunne and Sarah Delaney after being presented with their Irish U/18 caps