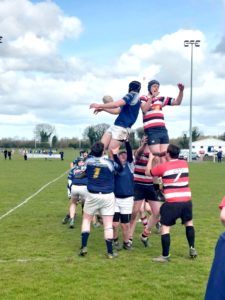 Portlaoise U/18 jumper, Darragh Davies gets highest in this lineout against Enniscorthy, and is well aided by Brian Barry and Corey Bartley

PORTLAOISE and Enniscorthy met for the second time in a week, this time in the Leinster U/18 plate semi-final on Saturday. While the Portlaoise team had come out on top in the league final, Enniscorthy were not coming to Togher for a second loss and they started with great confidence and aggression.

The home team still had the previous week’s result in their heads and were badly caught out in the second minute. Enniscorthy won a lineout, released the ball out across the backline and scored in the corner to take an early lead. The home side conceded penalty after penalty, letting Enniscorthy work their way down the pitch and crossing the line again for a second try after just 10 minutes.

It was back and forth for the two teams for the next ten minutes until Stevie Delaney locked onto the ball to win a penalty. It was taken quickly and passed out to winger Mikie Daly, who had to work hard to cross in the corner and put Portlaoise on the scoreboard.

Portlaoise upped their game, and after continuous pressure in the Enniscorthy half, Glen Connolly barged his way over to level the score. Matt Coonan was successful with the conversion to leave the score 12-10 going into the half time break.

The second half started well for the home side, gradually getting their passing game into gear, but a dropped ball let Enniscorthy capitalise on the mistake and they moved back up the field. The ball was passed out to one of their huge forwards and he bulldozed his way over to retake the lead fort the Wexford side.

Neither team were able to take control of the game with possession changing hands several times. But when Portlaoise were awarded a penalty in the opposition half Glen Connolly carried well. Marc Bracken found Ciaran Culleton on the left and he in turn passed on to Mikie Daly who made great ground down the touch line. The ball was offloaded on the inside to Culleton who had an easy run in for a try. Coonan was successful with the kick to leave the score 19-15 to the home side.

Enniscorthy worked their way back up the field where, from a scrum on the 22, the number eight picked and released the out half and only a superb tackle from James Kidd kept him from crossing the line. A penalty was conceded but Portlaoise were able to clear their line.

It was end to end drama. A rushed clearance kick by Enniscorthy was fielded by James Kidd, who was still sitting his Leaving Cert Irish oral when this game started. He certainly got an A1 on the field when he used his blistering speed down the touchline leaving defenders in his wake to score a game-changer in any language. Coonan converted to put 11 points between the teams.

Portlaoise held out for the next six minutes to claim victory and progress to their second final of the season. They will need to improve on their discipline and cut out the mistakes if they are to lift a second piece of silverware this year. The final versus Tullow takes place on Friday 22 April in IT Carlow.