Determined second half display not enough to upset the Cats

THESE young Laois girls made history by playing in Nowlan Park in a curtain raiser to Sunday’s Leinster senior hurling championship game. Unfortunately, that’s where the history ended for the Laois girls, but not before they gave a sterling performance. However, their inability to breach the Kilkenny full-back line proved their undoing.

Laois got the perfect start when Grainne Delaney struck a point from play in the first minute. When the same player caught the puck out and returned the ball between the uprights it was looking promising for the visitors.

Kilkenny were wide with their first two attacks before centre-forward Rachel Dowling opened their account from play after nine minutes and the girl from Dicksboro went on to inspire the hosts to greater things.

Against the run of play, after they hit three bad wides, Kilkenny took the lead and would not surrender it for the remainder of the game. Twelve minutes into the game the goal-getter supreme, granddaughter of one Eddie Keher, Caoimhe Keher caught a ball 25 metres out and smashed it past the Laois keeper. After another wide Kilkenny extended their lead with a point by Rachel Dowling with 16 minutes on the clock.

Laois were trying to halt the Kilkenny speed wagon but when half-forward Cliodhna Murphy won possession she shot a second goal from 20 metres out. At this stage it looked like becoming a rout but, in fairness, the Laois defence tightened up and the next two scores were frees converted by Rachel Dowling. Susie Delaney replied with a good Laois point from play.

The closing ten minutes of the half were evenly contested, Rachel Dowling adding another brace of points from frees and another from Cliodhna Murphy leaving the half time score reading Kilkenny 2-7 Laois 0-3.

Ten points was a big margin but Laois were wind assisted on the change over. They went about reducing that lead but the first point did not arrive until the 43rd minute, a free by Susie Delaney. Kilkenny brought on a substitute and Laois had replaced the full forward at the break.

Rachel Dowling opened the Kilkenny account from a free then Laois enjoyed a great spell of possession but hit four bad wides in succession as Dowling continued building the Kilkenny advantage.

Avia Coss fired over a great Laois point from play, midway through the half and two minutes later Susie Delaney gave a great pass to the St Brigid’s girl and she added her second point. Susie Delaney then converted a free. In the closing minutes Laois launched a great move that looked certain to yield a goal but Grainne Delaney saw her effort hit the crossbar and eventually she settled for a point and that would be the last score of the game.

Laois put in a great second half display but a ten point half time deficit proved too much and Kilkenny were perhaps that little bit sharper up front.

Great credit must go to this bunch of Laois players who have come on greatly but they will be disappointed having lost the All-Ireland to Offaly and now to Kilkenny in the league final. 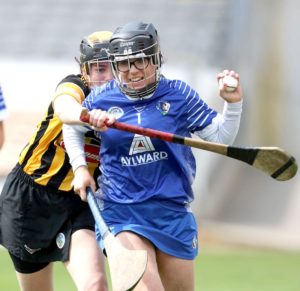 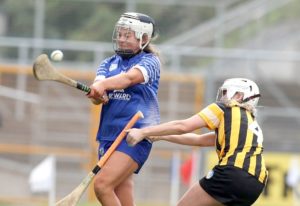