Laois ladies hang on for a nail-biting victory 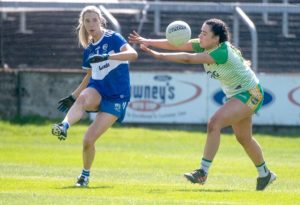 THE score line suggests a thriller and despite a strong cross-field breeze both counties got some great scores in MW Hire O’Moore Park on Sunday. On the other hand, both missed some great scoring opportunities and Laois were lucky in the end to come away with victory.

The opening half was a slow burner until Laura Marie Maher cut through the Offaly defence and hit the back of the net with 12 minutes played. When the same player found space two minutes later she repeated the feat and Laois led 2-2 to 0-3 and looked as if they would kick on.

Instead the Faithful produced a great ten minutes of football during which they kicked points by Saorah Doyle, Ellen McEvoy, and defender Saoirse McGuinness. Emma Lawlor settled the boat for Laois who were reduced to 14 players five minutes before the interval.

By half time Offaly had gone in front leading 1-9 to 2-4 at the break, and deservedly so.

Laura Marie Maher opened the second half scoring and the teams were level when Emma Lawlor converted another free. Offaly got back in front mainly through the accuracy of free kicker Saorah Doyle.

Midway through the half we went ten minutes went without a score at either end but the stalemate was broken thanks to a superb point by Eve Kelly which saw the visitors go two in front with ten minutes remaining.

The last ten minutes were full of incidents. Emma Lawlor kicked a free between the posts to level matters and then returned the ball between the uprights for the lead.

Offaly had not gone away and the reliable Saorah Doyle levelled matters again with four minutes remaining.

Then a move, started by Erone Fitzpatrick, when she picked out her former school colleague Emma Lawlor who knocked over her eighth point.

Offaly hit back for a good point from Marie Byrne but Laois raced down field and it was Emma Lawlor who added another point after a great run.

It might have been over then but Offaly are famous for their late rallies. They were nearly through on goal but Laois a defender halted their progress and the referee called back play for a free and a black card. Offaly might have gone on for a winning goal but instead they were awarded a free. For once, their scorer-in-chief Saorah Doyle dragged her shot across the goal and wide on the left hand side.

That was it and Laois have full points and welcome Wicklow on Sunday next, and dare we say, victory will qualify them for a semi-final place. 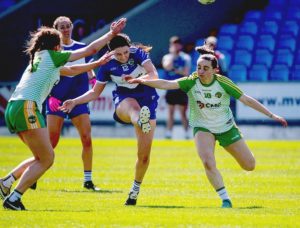 Erone Fitzpatrick kicking for a score against Offaly on Sunday Photo: Denis Byrne 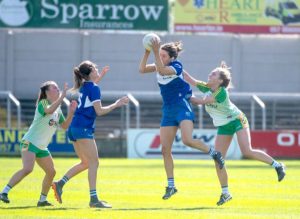