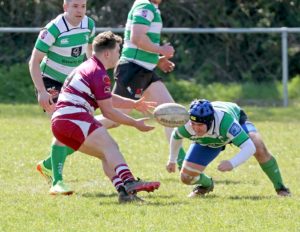 Portarlington scrum half Darragh Perry gets his pass away against Naas in the 2nds Provincial Towns Cup final in Rosetown on Sunday Photo: Sean Brilly

PORTARLINGTON will be disappointed at having lost Sunday’s 2nds Provincial Towns Cup final but they can look back at what was a very successful season. To get to a Leinster final and win promotion is not something to be sneezed at.

But back to the final played in Newbridge RFC. Portarlington were by far the most impressive side in the opening quarter. Granted they had a strong wind in their backs but that did not have a great effect as Portarlington played a handling rather than a kicking game.

They used their physicality to get on top of Naas. Their pack were prepared to take on the Kildare club up front and Ross Doyle in the centre was a real leader through out. His determined runs right through the middle made yards every time.

But as the game progressed you sensed that Naas were that bit fitter and that would be a telling factor later. And with Naas playing a wide running game that was ow it panned out.

The strong wind that blew straight down the pitch made it difficult to play into but the ground was firm and made for good running rugby. In the opening half Portarlington played with ball in hand and built up a 15 point lead by the half hour mark. They played much of the game in Naas territory and the Kildare team found it difficult yo make any headway into the wind.

The Laois club had to alter their plans very early on when they lost second-row Keelan Hunt after just six minutes with an ankle injury. They took the lead three minutes later when Naas, in attempting to clear their lines were penalised for entering the side of a ruck. Out-half, Kieran Hyland made no mistake with his kick.

Both sides continued to run the ball at this stage and in the 24th minute hooker Fintan Murphy put Portarlington further ahead with a try after a kick ahead which was mishandled by the Naas defence.

In the 26th minute Hyland intercepted in his own half and ran most of the way only to be caught just short of the line. In his effort to win back possession he was penalised and yellow carded for his tackle.

But Portarlington were now controlling the game and went further ahead in the 32nd minute. A slick inside pass to centre Ross Doyle saw him go under the posts for a try which scrum half, Darragh Perry converted.

Naas got back into the match as they scored two tries in the corner through winger Kenneth Gralton awhile Sean Kilgallen got over after a fine wide pass. Although the conversions were impossible into the strong wind Naas were now fully back in the game and only trailed 10-15 at the break.

On the restart he match was mostly played in the Portarlington half as they defended very well. In the 59th minute Naas centre Niall O’Neill got over for his first try after a good burst by the Naas forwards. It was converted by outhalf Paddy Brickell.

Naas went further ahead in the 65th minute as O’Neill got in for his second try which was again converted by Brickell.

With a huge number of players on both sides getting injured there was a long period of injury time. Despite all this Portarlington didn’t really look like they would get back into the contest.

In the 87th minute Naas hooker Tadhg Dooley got over in the corner for a try which was converted by Brickell. Portarlington did make some good burst but never looked like adding to their first half score.

Overall, Portarlington’s strong running centre, Ross Doyle, caused Naas many problems while Stephen Mulhall on the wing looked good. In the pack Stephen Oakley in the second row and Warren Murray at wing forward were solid.